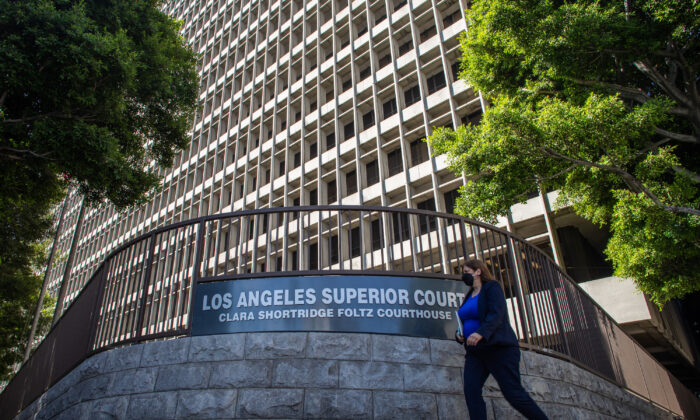 LOS ANGELES—Los Angeles prosecutors on Oct. 14 accused the CEO of a Michigan-based election software company of involvement in a “massive” data breach affecting at least a thousand victims, including minors.

Eugene Yu, 64, who heads Konnech, a company that provides software to electoral districts for the management of poll workers, was charged with the felony crime of embezzlement of public funds. He appeared in a Los Angeles County court on Oct. 14.

The Los Angeles County district attorney’s office has accused Yu of stealing personal identifying information of poll workers. The office alleged that such data was stored on servers in China, in violation of Konnech’s contract with Los Angeles County.

Superior Court of Los Angeles County Judge Victoria Wilson ruled that Yu be released on a $500,000 bond and remain under house arrest until his next hearing, which is set for Nov. 17. Yu was ordered to remain in Los Angeles County and wear an ankle monitor.

Donning a gray suit, metal-rimmed eyeglasses, and a white N95 mask, the 64-year-old CEO seemed to be in good spirits in the courtroom, where he appeared alongside his four lawyers.

Los Angeles County Deputy District Attorney Eric Neff alleged in court that the amount of data involved in the breach was “astounding,” adding that “this is probably the largest data breach in United States history.”

In Los Angeles alone, there were “probably thousands of victims,” Neff said. “They have contracts all over the country.”

He alleged that many minors’ data had been compromised because during the 2020 election, in the midst of the pandemic, the government had encouraged them to work at poll stations so that the elderly, who generally make up a large portion of poll workers, could stay at home.

Yu’s lawyer, Janet Levine, rejected the allegations, saying there was no evidence of personal identifiable information being distributed.

There’s “no breach in this case,” Levine said.

Neff argued against bail for Yu, a naturalized American who was born in China, for fear that he may be able to return to China, where he lived for 33 years and had business operations. Yu’s alleged crimes, he said, pose “a broad danger to the community.”

“He has extensive friends and family contacts out there,” the prosecutor said. “The company is still operating, still uses Chinese contractors to conduct its business,” he alleged.

Levine rebuffed allegations that Yu had extensive ties in China, calling it “disingenuous.”

It’s all “shenanigans,” she said. She noted that Yu doesn’t have a Chinese passport and has lived in the United States for most of his adult life.

Neff confirmed that Yu’s U.S. passport is in their possession.

Konnech first began supplying poll worker management software to Los Angeles County in 2019. In October 2020, Yu’s company entered into a $2.9 million, five-year contract with the county. The contract required Konnech to keep the county’s data in the United States and allow access only to U.S.-based staff who are citizens or lawful permanent residents, according to the Los Angeles County district attorney’s office.

Despite these obligations, Konnech employees were sending personal identifying information of Los Angeles election workers to third-party software developers in China “who assisted in creating and fixing” Konnech’s software, known as PollChief, according to the complaint filed by California prosecutors on Oct. 14.

In August, Luis Nabergoi, a Konnech project manager overseeing the Los Angeles contract, wrote in a Chinese-owned messaging app that any employees for Chinese contractors working on PollChief software would have “superadministration” access to the client data, the complaint states.

The message also described the situation as a “huge security issue,” according to the complaint.

On Oct. 4, the day of Yu’s arrest in Michigan, Nabergoi allegedly told employees in an internal email that the company was “moving to a new stage in the company maturity and we need to ensure the security privacy and confidentiality,” according to the court filing. Nabergoi added that to accomplish this, personal identifying information would “no longer be included in the fixing of Konnech’s PollChief software,” the complaint said.

Investigators have searched Yu’s Michigan home and two other locations, and are still examining evidence, a spokesperson for the county district attorney’s office told The Epoch Times.

The company before and after Yu’s arrest has repeatedly denied it has stored data in China and any ties to the Chinese Communist Party. It also brought a lawsuit against True the Vote, a Texas nonprofit that first alleged that they had evidence of Konnech’s data on Chinese servers.

Konnech has acknowledged that it had a subsidiary in China, which, it said, it closed last year.

After Yu’s arrest, Konnech assured its customers that its data are stored in a data center in Lansing, Michigan.

“We have never hosted your data or system in servers outside of the United States,” the company said in an Oct. 6 email to customers.

The company said in an earlier statement that the detention of Yu was “wrongful.”

“Any LA County poll worker data that Konnech may have possessed was provided to it by LA County, and therefore could not have been ‘stolen’ as suggested,” Konnech said in a statement.

Fairfax County in Virginia and the city of Detroit in Michigan say they have severed ties with Konnech in light of the arrest. Virginia’s Prince William county said they have suspended their use of the PollChief software and have erased data from Konnech’s server. DeKalb County in Georgia voted earlier this week to keep the contract but said it will store data on a government-controlled server rather than Konnech’s, and monitor access control and logging 24/7 to protect poll worker data.

Yu’s lawyer didn’t respond by press time to a request for comment regarding the allegations.