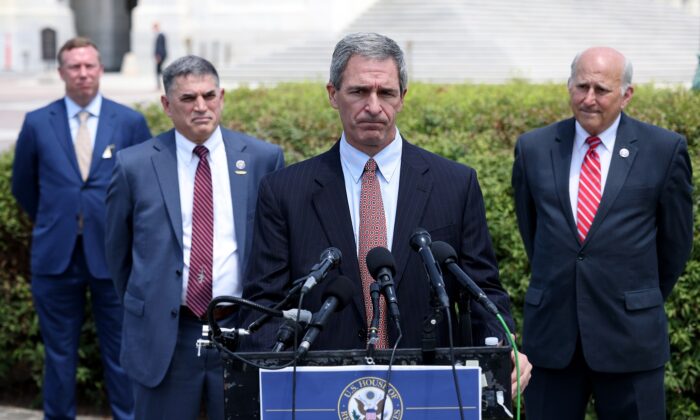 President Joe Biden “poured gasoline on that fire” with his July 13 criticism in Philadelphia of election reforms in Arizona, Georgia, Texas, and other states, according to former Virginia Attorney General Ken Cuccinelli.

“The President poured gasoline on that fire, he’s dividing us further, and he undermines the credibility of those advocating for a federal takeover of elections,” Cuccinelli told reporters during a July 14 conference call. “That helps us defeat them, but it doesn’t help America come together to have this discussion over what does an ideal election look like.”

Cuccinelli, who served as acting deputy secretary of the Department of Homeland Security under President Donald Trump, is now president of the Election Transparency Initiative, an Arlington, Virginia, nonprofit group advocating in support of election transparency and security at the state level.

He was referring to Biden’s statements on July 13 condemning the election reforms as anti-democratic.

“There is an unfolding assault taking place in America today, an attempt to suppress and subvert the right to vote in fair and free elections, an assault on democracy, an assault on liberty, an assault on who we are, who we are as Americans,” Biden said in a speech delivered at the National Constitution Center in Philadelphia.

The speech was officially aimed at generating public support for congressional Democrats’ so-far-unsuccessful efforts to replace the Constitution’s assignment of authority over elections to the states with federal controls.

Biden wants Congress to pass HR1, the “For the People Act,” and HR4, the “John Lewis Voting Rights Advancement Act.” The former was approved on a party-line vote in the House, but hasn’t come up for a vote in the Senate. The latter hasn’t yet been debated by either chamber of Congress.

He devoted a major portion of the speech to sharp attacks on Republicans in Congress and state legislatures for allegedly seeking to revive the Jim Crow laws of the segregated South after the Civil War.

“This year alone, 17 states have enacted, not just proposed, but enacted, 28 new laws to make it harder for Americans to vote, not to mention, and catch this, nearly 400 additional bills Republican members of the state legislatures are trying to pass. The 21st-century Jim Crow assault is real. It’s unrelenting, and we’re going to challenge it vigorously,” Biden said.

However, Cuccinelli says Biden’s comments contradicted his Department of Justice (DOJ), as the Supreme Court noted in its decision earlier this month upholding Arizona’s election reforms.

In Brnovich v. Democratic National Committee, the high court, in a 6-3 decision, said Arizona has the legal authority under the Constitution to bar the counting of votes cast in a precinct other than the one in which the voter resides. The decision also upheld the Arizona law’s banning of “vote harvesting,” the practice of political activists going to voters’ homes to retrieve mailed ballots and take them to counting stations.

Cuccinelli pointed to a Feb. 16 letter from the DOJ to the court when it was considering the case that said the department agreed that the two provisions weren’t discriminatory.

But shortly after the court’s decision was announced, Biden wrote on Twitter that the justices undercut “voting rights in this country—and [that] makes it all the more crucial to pass the For the People Act and the John Lewis Voting Rights Advancement Act to restore and expand voting protections. Our democracy depends on it.”

Cuccinelli’s remarks were made in preparation for his testimony in the afternoon of July 14 in a hearing on voting rights before the Constitution subcommittee of the Senate Judiciary Committee.

“This hearing today will be one more on the road Democrats are attempting to use hysteria instead of facts,” Cuccinelli said. “And that’s what they are relying upon … that is the gulf that separates the two sides in this debate today.

“One side, even with the president of the United States being found to be lying about things like the Georgia law, are on the side of hysteria, while those of us slowly and incrementally trying to improve the quality of elections for all Americans, no matter what color, with methods that Americans overwhelmingly approve of, are on the side of improving the strength and the health of our democratic institutions in this country.”