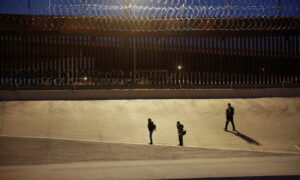 An official in Texas’ Attorney General’s office testified during a state House hearing that the number of election fraud cases in Texas is at an “all-time high.”

The amount is “higher than our historical average by a long shot,” said Jonathan White, the head of the election fraud agency within the Texas Attorney General’s Special Prosecution Division, to the Texas House Elections Committee last week, reported The Texan.

When asked by a state lawmaker if there were trends in election fraud prosecutions, White said that “have 510 offenses pending against 43 defendants in court right now,” saying it’s “for several reasons probably.” He did not elaborate.

The attorney general’s office prosecuted 534 election fraud-related cases committed by 155 people since 2005, according to the report.

“I think we could both agree that 99.9 percent of people are honest and forthright, they don’t cheat at elections. They don’t go around murdering people or committing aggravated robberies, either,” White said in the hearing.

The measure, according to state Sen. Bryan Hughes, a Republican, is “designed to address areas through process where bad actors can take advantage because we want the people of Texas to be confident their elections are fair, honest, and open.” The legislation “standardizes and clarifies” voting rules so “every Texan has a fair and equal opportunity to vote, regardless of where they live in the state.”

It also will require voters who have disabilities to prove that they can’t access polls in person in order to qualify for a mail-in ballot, and would also require authorization from top state leaders to be alerted about any private funding of more than $1,000 that is given to election departments, according to KXAN.

Democrats said the bill will lead to voter suppression.

“Every eligible Texan deserves to have their voice heard at the ballot box—regardless of their race, ethnicity, disability, gender, age, income, or party. SB 7 makes it harder for every Texan to vote,” a statement from the state Democratic Party said. “We aggressively fought this bill because we know it will disenfranchise racial and ethnic minority voters and voters with disabilities, including veterans.”