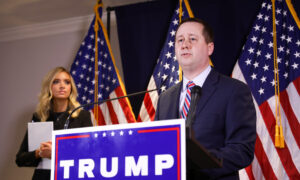 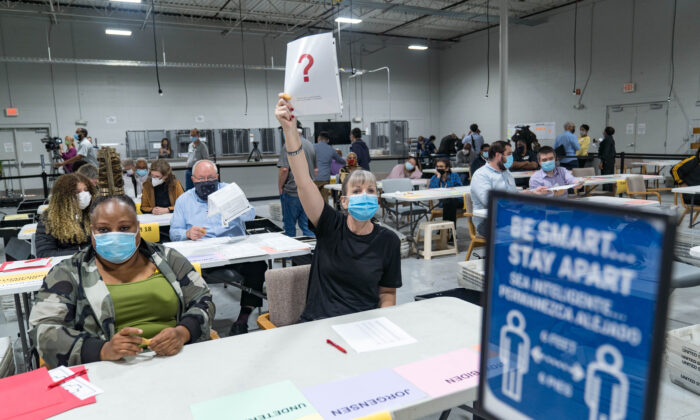 A Gwinnett County worker raises a piece of paper indicating she has a question as the recount of ballots begins in Lawrenceville, Ga., on Nov. 13, 2020. (Megan Varner/Getty Images)
2020 Election

Matt Braynard and his wife had planned to be in the Dominican Republic, but “right now, this is where I’m needed,” he said on YouTube on Nov. 8.

Braynard has assembled a team to look for inconsistencies in the six contested states—Pennsylvania, Georgia, Michigan, Wisconsin, Arizona, and Nevada.

So far, they’ve identified 1.25 million voter issues that they’ve following up on through phone calls and against other databases.

The biggest issue they’ve found so far is with voters who had submitted a National Change of Address form to the post office indicating they moved out of state, yet appear to have voted in 2020 in the state they moved from.

“We’re calling them to confirm whether or not they actually cast the ballot, or if that ballot was cast by somebody else in their name,” Braynard told The Epoch Times.

In Georgia, the team found 17,877 early or absentee voters who had filed out-of-state move notices—a higher number than the current vote differential in the state. The current vote tally in Georgia, as of 1 p.m. on Nov. 13, shows Democratic nominee Joe Biden ahead of Trump by 14,164 votes.

Georgia Secretary of State Brad Raffensperger has called for a recount and audit of the presidential race in his state, which began on Nov. 13 and is expected to conclude at midnight on Nov. 18. Georgia is required to certify its election results by Nov. 20.

So far, they’ve confirmed 631 double-voters in Pennsylvania and 987 in Nevada—and that’s before they’ve checked the Election Day in-person voting information.

“I’m surprised by how many out-of-state national changes of address we found. Because that does indicate very strongly that somebody established residency somewhere else,” Braynard said. “And then they got mailed an absentee ballot, were able to get one, and they cast it. And in many cases, as we found, they not only cast that ballot, they cast a ballot in the new state they live in as well.”

Aside from the change of address issues, Braynard’s team is calling people who received absentee ballots but didn’t return them. They’re asking the person if he or she requested the ballot, and if so, did they return it, only for it not to be counted.

The third chunk of phone calls relates to precincts that had an extremely high turnout. They’re calling voters who had never voted before, but voted early or absentee in this election, to confirm whether they indeed cast that ballot.

So far, Braynard and his team have found “a few hundred” people who have been willing to sign declarations, which will then become affidavits if lawyers want to include that case. Braynard said he has passed all relevant information to the Trump campaign.

“We have living, breathing human beings that said, ‘A ballot was cast in my name, I did not cast that ballot nor request an absentee ballot,'” Braynard said. “And that’s a problem that needs to be answered for.”

He said his work won’t necessarily overturn the election, but it may push a manual recount or a signature examination. And he hopes it’ll result in future elections being cleaner.

“Our method is designed to—if it detects any [inconsistencies], it’s probably going to pick up just a few dozen,” Braynard said. “It’s not designed to catch everybody that had an illegal ballot cast, but it’s designed to catch indications that an organized, illegal ballot operation was operating. We’re not making the claim there is, but we’re just putting the data together and putting it out there.”

Braynard is also running early and absentee voting records against the national death database, to ferret out any votes cast on behalf of dead people.

The Trump campaign on Nov. 11 released the identities of several people who had died but had votes cast in their name.

A third-party analysis in Michigan found about 9,500 voters whose names and dates of birth match death records in the Social Security Death Index. However, the match isn’t definitive proof that the voter is dead, according to Logan Churchwell, spokesman for the Public Interest Legal Foundation. Further analysis is needed as it’s “quite common” for two people to share the same name and date of birth, he said.

“Ultimately, we may determine that election fraud, at least the kind we’re investigating, may not have been determinative in this election. And we’d be happy to report that,” Braynard said. “If you’re a supporter of Biden and you think this is a clean election, you should support our work, because then we’ll help establish that, if that was in fact the case.”

Braynard set up a GiveSendGo fundraising account after GoFundMe deleted their account, which had raised $220,000. The GiveSendGo has raised $578,000 so far, and most has been spent on buying huge databases, such as the Master Death Index and the National Change of Address database, and setting up call centers. Braynard said he’s not taking a paycheck for the work he’s doing.