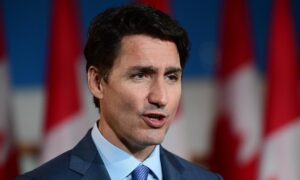 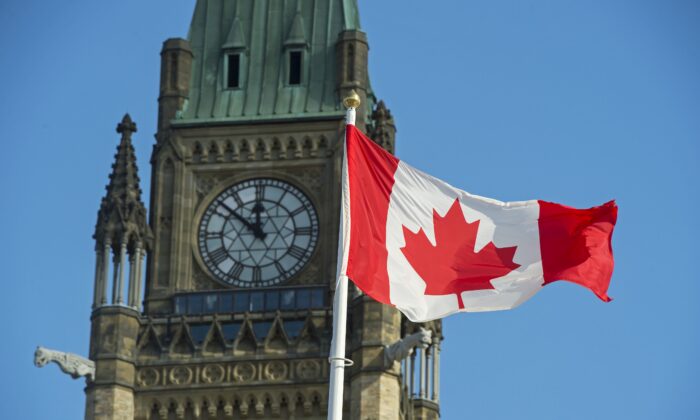 The Canadian flag flies near the Peace Tower on Parliament Hill in Ottawa in a file photo. (The Canadian Press/Sean Kilpatrick)
Canada

Although polls show the majority of Canadians are concerned about the federal debt and deficit, the issue may take a back seat during the election as blowback from the ballooning debt hasn’t had a major impact yet, say veteran political and economic analysts.

The Trudeau government has borrowed substantially to respond to the pandemic, causing a $354 billion deficit in 2020-21, with this year’s deficit expected to be $154.7 billion. Nearly three-quarters of Canadians (74 percent) say they are concerned about the size of the current deficit, according to a Nanos poll conducted in May.

“They just sent out the announcement that they’re giving all the seniors $500 in [Old Age Security],” Flanagan said in an interview.

Last spring’s federal budget brought in $100 billion in new spending, including $30 billion more for child care and $17 billion extra on the environment. The Parliamentary Budget Officer says without a change of direction, annual government revenues won’t overtake spending until 2070, by which time Canadians will have paid $3.8 trillion in interest payments.

“As long as it’s just a news story with hundreds of billions of dollars, it’s just numbers. And I think that’s why the Liberals are striking at an election right now—they’ve got to hold it before the consequences start to manifest,” Flanagan said.

“The impact will come when interest rates start to shoot up, when consumer costs, cost of living index shoots up, when taxes go up to try and cover it—that’s when people start noticing.”

Steven Ambler, the David Dodge Chair in Monetary Policy at the C.D. Howe Institute, agrees that low interest rates have limited the consequences of Canada’s indebtedness.

“With interest rates being so low, the debt servicing payments are much easier to afford. That seems to have led to … complacency on the part of federal parties, notably the Liberals,” Ambler said in an interview.

At a press conference shortly after the election was called, Conservative Party leader Erin O’Toole renewed his pledge to return Canada to a balanced budget within 10 years. The Conservative economic plan says stimulus measures should be “targeted and time-limited to avoid a structural deficit” and to “get the economy growing again … so that we have the revenue to pay for the government services that Canadians rely on.”

“They [Conservatives] don’t say whether it’s by more government control or by reducing tax rates and rationalizing the tax system and letting private firms invest and getting growth going that way. That would be the small-c conservative approach, but they don’t [say that]. It’s so vague,” Ambler said.

High government spending is always a problem, even without red ink, according to Ambler.

“There seems to be a reasonably robust relationship across time and across countries, which says that once you go beyond … 25 percent at the most, government spending-to-GDP, it will have a negative impact on growth. And we’re certainly in that ballpark now,” he said.

He noted efforts by Jean Chretien’s government to balance the budget after the debt-to-GDP ratio hit a hefty 66.6 percent in 1995.

“I actually have a fair amount of admiration for the Chretien government and for Paul Martin as a finance minister. They basically came up with a plan and carried it out. And the plan at the time was to put a lid not just in the fraction of [government spending in] GDP, but on the growth of real spending.”

Flanagan said the Chretien Liberals “more or less” appropriated the Reform Party’s deficit-elimination plan he and Stephen Harper made “on the back of a napkin” in 1993. He said the last 50 years of federal political history shows it’s hardest to balance the budget when the NDP holds the balance of power.

“A Liberal majority would probably find it easier to go ahead with shutting down the temporary programs, but that still won’t bring us anywhere near close to balanced. And that’s the worst of all possible worlds because you have power and responsibility to separate. The NDP doesn’t have to take responsibility for government, but they have the power to influence the spending of government to gain their support,” he said.

Debtclock.ca, run by the Canadian Taxpayers’ Federation, places the net federal debt at $1.13 trillion, costing the average Canadian $29,883. The debt grows at $424 million a day, and over $17 million per hour. On August 10, the CTF announced a cross-country billboard and social media campaign to publicize the issue.