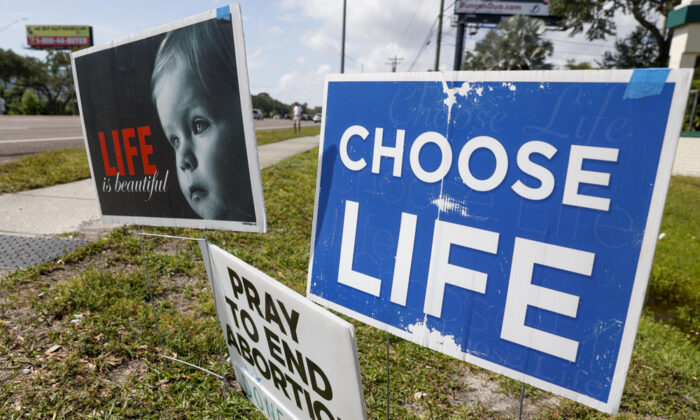 Pro-life signs are seen outside the All Women’s Health Center of Clearwater on May 3. The Supreme Court has struck down the landmark 1973 Roe v. Wade case that recognized a Constitutional right to an abortion. States can now ban the procedure. (TNS)
By Steven Kovac

An 84-year-old volunteer canvasser in Michigan was shot following an argument while distributing pro-life pamphlets door-to-door in her community about a state abortion ballot proposal.

According to a Sept. 24 statement from Right to Life of Michigan, a “heated conversation” took place on Sept. 20 between one of its local volunteers and an occupant of a home in Odessa, a small community near Grand Rapids.

As the volunteer was leaving the residence, she was allegedly shot in the rear part of her shoulder by a man who hadn’t been a part of the discussion.

Grand Rapids TV 8 reported on Sept. 23 that the wounded woman drove herself to the Lake Odessa Police Department to report the shooting.

She was taken to the hospital for treatment and later released. The woman is recovering from her wound and is in good spirits and will be going out campaigning again, Right to Life of Michigan communications and education director Anna Visser told The Epoch Times on Sept. 26.

“She is a strong, dedicated, longtime, pro-life volunteer who is not easily intimidated. We are happy she is OK.

“No one deserves to be shot for their beliefs, whatever they may be,” Visser said.

Visser said the shooting is being investigated by the Michigan State Police and that Right to Life is eagerly awaiting the police report.

“Whatever happens, we will continue to have volunteers go door-to-door. To our people, the cause of saving innocent lives is so important that it warrants the risk. We will not be intimidated.”

She told The Epoch Times, “Our volunteer that was shot went visiting all by herself.

“We strongly encourage all volunteers to be cautious and go out in pairs or in small groups. And they should watch for ‘No Soliciting’ signs.”

The victim, who wants to remain anonymous, doesn’t know the identity of the man who allegedly shot her or his motive, according to the Right to Life statement.

TV 8 reported that law enforcement sources described the prelude to the shooting as “an alleged verbal altercation while she [the volunteer] passed out pamphlets.”

The literature the volunteer was distributing explained why Proposal 3, a citizen-initiated ballot proposal that seeks to enshrine abortion access in the state’s constitution, is “so misleading and dangerous.”

“The majority of Michiganders know that abortion is health care,” Loren Khogali, executive director of the ACLU of Michigan, wrote on the organization’s website. “Michigan is on the right side of history as we lead the way with Reproductive Freedom for All.

“The Supreme Court’s overturn of Roe v. Wade will not take away the rights and freedoms of people in Michigan to determine if and when they become a parent.

“We will not allow forced pregnancy in our state, nor will we stand by as the devastating impacts of a post-Roe world disproportionately impact people of color [and] LGBT communities.”

The Great Lakes Justice Center (GLJC), an opponent of the RRFI, recently posted online an issues brief detailing what it calls “the perils of Proposal 3.”

The brief says in part: “If passed, the RRFI will enshrine in Michigan’s Constitution the most extreme abortion law in the country. It creates a new, unlimited, and unregulated right to abortion and an additional, undefined ‘right to reproductive freedom.’”

According to the GLJC analysis, the proposed amendment gives the new right of reproductive freedom to all “individuals,” including children.

GLJC also contends that sex between an adult and a minor child will be protected by the amendment, as long as the child consents.