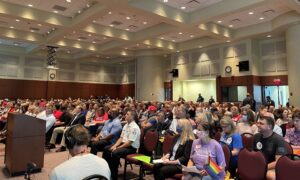 To Save America, Run for School Board
0
Share Now
TelegramFacebookTweetEmailTellMeWeReddit
Copy Link 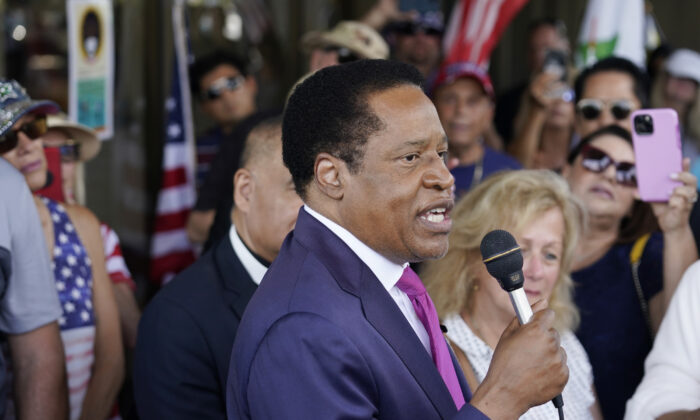 Who’d a thunk it?

Neither the Los Angeles Times nor Politico (both of whom had multiple reporters) and a host of other mainstream media suspects, including the Associated Press, got to ask a single question Friday at Larry Elder’s first online Zoom press conference for the California gubernatorial recall.

The likes of the Bay Area Yu Channel, the Sing Tao Daily and Lynn Ku of KTSF did.

If you enjoy seeing MSM stuffed shirts being upended, it was quite a hoot. A reporter from the LAT—I won’t name him out of a courtesy he didn’t seem to have himself—was throwing a tantrum in the Zoom chat room due to his receiving a lack of attention.

And if you sense a pro-Asian bias in all this, you are obviously correct and it was obviously deliberate on the part of the Elder campaign. These seemingly small Asian outlets—considering the size of California’s Asian community, they could be quite big in actuality—were given the only opportunities to ask questions.

And their questions were quite substantive.

It was rather like the reverse of a White House press conference, particularly during the Trump era, when question after question from CNN et al was of the “When did you stop beating your wife?” nature.

Normally I abhor identity politics, but if a major population group in California—Asians are 14.7 percent of the state, while blacks are but 5.8 percent, according to the 2018 census—has been getting the short end of the proverbial stick, it is those Asian-Americans.

This is true in two areas especially—education where they have been the victims of negative discrimination for doing so well in school while being restricted in college admissions, and in the growing issue of street violence where they have been among the groups most subject to attack.

The first of these areas is pretty well known, having been the subject of lawsuits and so forth, but the reality of the second has been largely hidden by the mainstream media because most of this violence is black on Asian.

The MSM, not surprisingly, doesn’t want to talk about that. Elder, uniquely positioned to do so, did, during the press conference and, I would assume, elsewhere. As he put it, nothing changes if you don’t tell the truth.

That the Elder campaign is going strong for the Asian vote is not entirely surprising. For many years the GOP inexplicably ignored this group, which offered a natural opportunity given the number of small business people in that community, but recently have woken up to it, particularly in California’s Orange County where the Republicans had renewed success in the 2020 Congressional election.

The Elder campaign, however, appears to be focusing on Asians to a yet higher degree, giving them priority in this first of what we were told will be several virtual press conferences. (I suspect Hispanics will be next, since polling suggests Larry has growing popularity in that community as well.)

Underscoring the Asian emphasis of this first conference, the host was Wing Ma, a highly-intelligent, longtime conservative activist and writer who worked with me some years ago at PJ Media and is now Elder’s communications director.

The speaker introducing Elder was Betty Chu, the fiery (to say the least) octogenarian former mayor of Monterey Park, a working-class bastion in East Los Angeles.

Elder spoke for fifteen minutes or so and was his usual fluent self, evidencing a solid grasp of the issues confronting the state and—perhaps with the exception of the wild fires, although those now are engulfing most of the West—the country.

First and foremost, as it is for many of us now in the era of critical race theory, was education, not only the erasure of the hideous CRT but the opening up of school choice, which Elder has espoused for many years.

Also, top of his agenda would be a state of emergency to deal with the homeless problem. Elder, since I have been listening to him, has tilted to the libertarian but is now veering pragmatic on this issue because it is so extreme.

He further dealt with the escalating—and rather frightening given the district attorneys in San Francisco and Los Angeles—California (and nationwide) crime problem. He is for building more prisons rather than letting violent criminals out, a safety-first approach in an increasingly dangerous world.

Elder demonstrated a wide breadth of knowledge, answering the questions in considerable detail. We live in a peculiar time in which the talk show host often has a better command of the issues than most politicians due to the demands of their profession—all those call-ins (Who was more knowledgeable than Rush?).

It is highly unlikely that Gavin Newsom would want to debate Elder, but can Elder win against what will surely be a tsunami of Democratic money already underway? For the Democrats the loss of California would be an unmitigated and completely unanticipated disaster that could have a ripple effect across the country.

I am no Nostradamus (neither was Nostradamus, if you look it up) and, for the moment must go with that guru of gurus, Yogi Berra: “Predictions are difficult—especially about the future.”

But I will certainly be on Elder’s next Zoom press conference (though I will be unlikely to ask a question. It’s far more interesting, not just in the Zen sense, to listen and learn.).

I will, however, bite the bullet—even to constantly wearing a mask while dodging excrement in the streets—and go out at the end of the month for a few days to the state I fled now several years ago, California. I would like to see up close and personal what is happening. But I can’t guarantee I will have any special insights. California, like the story of the elephant felt by a blind man, is so big your results, and fate, depend on where you touch the beast.

Nevertheless, although it’s been a while, I still want to believe I can find my way around, at least in LA. More then.

Larry Elder is a contributor to The Epoch Times.