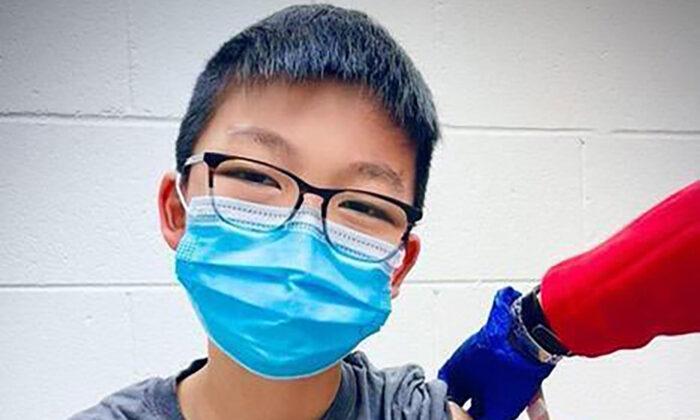 Caleb Chung from the United States receives the first dose of the Pfizer coronavirus vaccine or placebo as a trial participant for kids ages 12-15, at Duke University Health System in Durham, N.C., on Dec. 22, 2020. (Richard Chung via AP)
Vaccines & Safety

Eight cases of myocarditis, a type of heart inflammation, have been reported in children aged 5 to 11 years who received Pfizer and BioNTech’s COVID-19 vaccine, officials from the U.S. Centers for Disease Control and Prevention (CDC) said on Dec. 16.

The CDC’s vaccine advisory panel spoke via an online meeting Thursday to discuss the Johnson & Johnson coronavirus vaccine following reports that the shots were linked to rare but life-threatening blood clots.

During the discussions, officials noted that the agency had received reports of eight cases of myocarditis, a form of heart inflammation, in children aged 5 to 11 years who received Pfizer and BioNTech’s COVID-19 vaccine.

The cases were reported in the U.S. Vaccine Adverse Event Reporting System (VAERS) and presented by the CDC to a panel of its expert advisers.

Officials stated that as of Dec. 12, there were 41,232 VAERS participants aged between 5 and 11 years, all of whom have received one dose of the vaccine, while 23,583 participants have had two doses of the Pfizer vaccine. Participants are roughly made up of 49.7 percent females and 50 percent males while 0.4 percent are “unknown.”

In total, 14 cases of myocarditis were reported and eight of those met the agency’s official case definition of the inflammatory disease. Four of the eight cases were in females and four were in males.

The CDC said in November (pdf) that adolescents ages 12 to 17 years were at a higher risk of myocarditis than children ages 5 to 11 years but noted that the risk of developing the disease, or pericarditis—an inflammation of the tissue surrounding the heart—after receiving the COVID-19 vaccines is lower than the risk of myocarditis associated with COVID-19 infection in adolescents and adults.

The agency also said last month that no cases of myocarditis or pericarditis had been reported in clinical trial for children ages 5 to 11 years but noted that the study was not designed to assess the risk of myocarditis.

According to a new study, the risk of developing myocarditis is higher for people younger than 40 after receiving Moderna’s COVID-19 vaccine than it is from contracting COVID-19,

Researchers found 15 excess cases per 1 million people who received a second dose of the vaccine compared to 10 extra cases of myocarditis following a positive COVID-19 test.

Elsewhere during Thursday’s meeting, CDC officials stated that of the 41,232 VAERS participants aged between 5 and 11 years, in the first week after the first vaccination, roughly 55 percent of participants reported pain at the injection site, while roughly 35 percent reported systematic reactions such as fever, headache, body aches, and fatigue.

After both the first and second shots, a small number of participants reported needing medical care, officials said.

Across the United States, more than 7.1 million doses of the Pfizer-BioNTech vaccine have been administered to children of these ages, as of Dec 9, 2021.

So far, there have been two reported deaths in children who received the vaccine: a girl aged 5 with a “complicated medical history” of Twin-to-twin transfusion syndrome, cerebral palsy, and seizure disorder, among others; and a girl ages 6 who also had a complex medical history.

Both deaths are still under review.