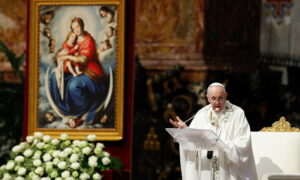 ROME—Eight people were found dead on Saturday under the rubble of a collapsed apartment building near the southern Italian town of Naples, after rescue workers searched for bodies through the night, a fire brigade spokesman said.

The four-storey apartment in the town of Torre Annunziata, built in the 1950s and overlooking the sea, crumbled at around 6:20 a.m. local time on Friday.

Rescue workers said on Friday that eight people were missing.

“We recovered all the bodies… We found them all, dead,” national fire brigade spokesman Luca Cari said.

He said search and rescue operations had ended and that the eight victims included two young brothers, aged 14 and eight.

Local prosecutors have opened an investigation to determine the cause of the collapse.