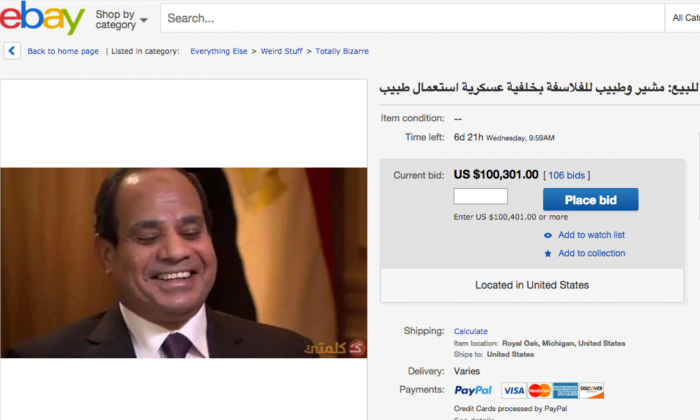 After Egyptian President Abdel Fattah el-Sisi said in a speech that he would sell himself if he could, an eBay page doeing exactly that was made. (eBay)
Middle East

Egyptian President Abdel Fattah el-Sisi was put on eBay for sale after giving a speech on the country’s ailing economy.

In the speech broadcasted on state television el-Sisi said that: “If it were possible for me to be sold, I would sell myself.”

That’s possible, someone must have thought, putting the president on sale on eBay, with bids reaching 0ver $100,000 within hours before the page was taken down.

Since then another eBay page has popped up. The hastag #ebay became a trending term in Egypt.

In his speech el-Sisi also called on Egyptians to make a donation by text to a public fund to help the country’s economy.

El-Sisi’s speech was particularly ill-received as many are not pleased with his handling of the country’s economy which has seen a sharp decline due to slowing investments and an ailing tourism industry.

El’Sisi, formerly the chief general of Egypt’s powerful and influential military, came to power in July 2013 after President Mohamed Morsi, leader of Egyp’s Muslim Brotherhood, was ousted in a coup.

Since the ousting of Egyptian President Hosni Mubarak in 2011 during the Arab Spring, Egypt has seen a sharp decline in the value of its currency as well as an increase in it’s unemployment rate to 12.7 percent.

In particular Egypt’s tourism industry, considered a key part of it’s economy has been on the decline, further exacerbated by the current lack of security in parts of the country.