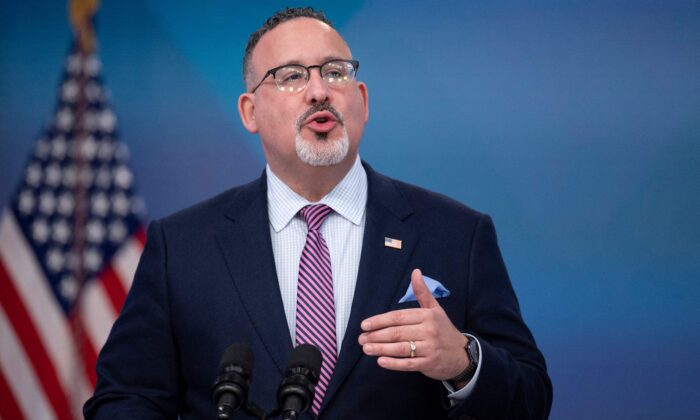 As parents nationwide call for greater transparency in public schools, U.S. Secretary of Education Miguel Cardona repeatedly dodged a question about whether parents should be informed if their child is undergoing a gender transition at school.

During a virtual hearing on May 26, Cardona testified before the House Education Committee on his department’s budget request for 2023. He continued to avoid giving direct answers when Rep. Jim Banks (R-Ind.) asked him if he thought that schools should “keep a student’s gender transition secret from their parents.”

“I’d love to answer questions on the budget, which is why I am here,” Cardona replied, only to have Banks pushing back and demanding him to explain the Education Department’s stance on that issue.

“It’s a simple question: Should schools ever keep it a secret from parents if their children are involved in gender transition?” the congressman asked again.

“Parents and schools must work together to support students,” the secretary said, pointing to “policies and practices” that he said prove what he was saying.

A visibly confused Banks cut Cardona off and repeated the question once again: “Should schools ever keep it a secret from parents if their children are involved in gender transition?”

“Schools should be partnering with parents on communication, and there are times when schools are working and supporting students on issues that are very sensitive, but I do believe that parents should be connected with schools, and, in many cases, working together is what’s going to help the student,” Cardona said.

“I have spoken to students who shared, whatever situation is at their home, that they felt safe at the school, and we have to be careful not to turn this into something that it’s not,” he continued. “Our schools are safe places for our students, and our teachers are often the front-liners when it comes to supporting our students when they have issues in their lives.”

“This is a very bizarre answer,” Banks said before yielding the rest of his speaking time.

In recent years, school districts across the country have instructed educators to bypass parental consent and notification when it comes to a student’s gender transition.

For example, New Jersey’s official “Transgender Student Guidance” tells school districts to avoid “work with transgender students” to avoid “inadvertently [disclosing] the transgender student’s status” to their own parents. Similarly, the District of Columbia Public Schools’ guidelines note that “students may choose to have their parents participate in the transition process, but parental participation is not required.”

Meanwhile, Chicago Public Schools’ guidelines state, “When speaking with other staff members, parents, guardians, or third parties, school staff should not disclose a student’s preferred name, pronoun, or other confidential information pertaining to the student’s transgender or gender nonconforming status without the student’s permission.”