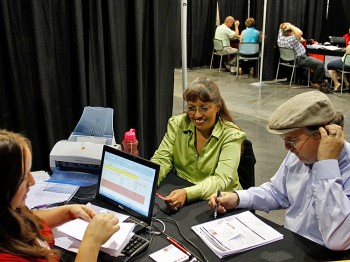 Based on an ABI Quick Poll, the American Bankruptcy Institute (ABI) predicted at the beginning of this year that bankruptcies would be on the rise in 2011. This prediction was based on news that bankruptcies had increased in 2010 by 14 percent compared to the prior year.

“Bankruptcies have increased each fiscal year since 2005, when Congress overhauled the Bankruptcy Code to reduce the number of consumers and businesses filing for bankruptcy,” according to an ABI press release.

“The drop in bankruptcy filings demonstrates the continued effort of both consumers and businesses to decrease their debt loads and shore up their finances,” said Samuel J. Gerdano, executive director at ABI, in a press release.

According to experts, most bankruptcy filings are due to significant business or consumer debts and the inability to borrow money due to the tight credit markets plaguing troubled firms.

“The fallout from the recent recession continues to take a toll on U.S. businesses as access to credit remains elusive for distressed companies,” said ABI in a call for a media teleconference at the end of last year.

“While business owners are enthusiastic about growing, many of them lack the financial resources to do so,” according to a recent Pepperdine University press release.

Almost all business management respondents to a Pepperdine University survey are optimistic about improvements in the business environment over the next year and are considering expansion strategies.

More than half of the respondents lack funds for expansion. Growth has become an elusive factor. So it is a Catch-22 situation, where businesses see economic indicators that contracts will come in, but can’t produce because of lack of funds to upgrade equipment or buy raw products needed in the production.

Unsuccessful borrowing attempts were reported by more than half of the survey respondents. While 59 percent could land a loan only on secured basis, one-fifth were advanced loans by family and friends, and 11 percent found investors to provide them with funds.

“Just 13 percent of privately-held businesses that responded to the survey reported securing funding from Angel Investors, Venture Capitalists and Private Equity combined,” according to a Pepperdine press release.

Close to two-thirds of lenders deny loan applications, with more than 61 percent putting the blame on government regulations.

“Banks on the other hand report feeling increased pressure from regulators to avoid making risky loans and because of that they are denying loans that otherwise would have been accepted. The result is that small business owners are left without access to capital,” said Dr. John Paglia, researcher at Pepperdine, in a recent press release.

Investment bankers will be a smidgen more accessible to small business needs, as 72 percent of the respondents are considering approving at least four, if not five, loan applications over the coming 12 months. The researchers view this as an improvement since the fall 2010 report, when these bankers were not willing to approve more than three loan applications.

There was a caveat, as investment bankers were said to be looking at companies’ earnings before interest and depreciation (EBITDA). For those with an EBITDA significantly higher than $1 million, the investment bankers’ pockets would be loosened.

“One of the primary themes that emerged from recent U.S. bank results is the lack of loan growth. … Lending is a core mission of a bank and is a significant source of profitability and volatility in bank performance,” said Fitch Ratings in one of its latest U.S. Bank Loan Growth reports.

Fitch reported that in mid-2008, loan growth had peaked, after which it went on a downslide over every one of the subsequent quarters.

Commercial loans have inched up since mid-2010, while home loans to individuals, given the unprecedented number of home loan defaults, have fallen significantly in the private housing sector and for construction.

Going forward, banks’ real estate portfolios will decline even further over the coming months, and Fitch hesitates to predict any upward trend, as the future of government-sponsored enterprises (GSEs), including Fannie Mae and Freddie Mac, “remains an open question,” according to Fitch.

“Prolonged periods of economic growth seem to require a healthy banking system that is willing and able to provide fresh capital to consumers and businesses. Thus, while the current state is not alarming, continuation of bank loan portfolio contraction into 2012 and 2013 would call into question the sustainability of the growth in the U.S. economy,” Fitch warned.

Fitch suggests that the prolonged slowdown in lending activities casts doubt on banks’ willingness and ability to lend.

Risk factors that were neglected before the financial upheaval have been revamped and have become a major focus during reviews of loan applications. Furthermore, rules and regulations, given the Dodd-Frank Wall Street Reform and Consumer Protection Act, have taken on a life of their own.

A deep fear of being investigated and taken to task by the Securities and Exchange Commission (SEC) and the Department of Housing and Urban Development (HUD) on different charges, including violation of federal securities laws, is putting another damper on lending activities.

“Financial resources are clearly improved, but are likely only sufficient and stabilized at this time to pursue selective loan growth,” Fitch suggests.

Fitch thus gives the green light concerning banks’ ability to lend, but believes that banks’ willingness to lend is still limited, although signs of easing up have appeared.

Banks’ willingness to lend is not easy to assess, as banks are unwilling to openly discuss their lending practices.

Another indicator of willingness to lend is the Senior Loan Officer Opinion Survey on Bank Lending Practices conducted by the Federal Reserve Board, with the latest completed in April.

“On net, bank lending standards and terms generally had eased somewhat further during the first quarter of this year, and that the demand for commercial and industrial loans (C&I) and for commercial mortgages increased, while that for residential mortgages continued to decrease,” according to a summary of the Opinion survey, published by the Fed.