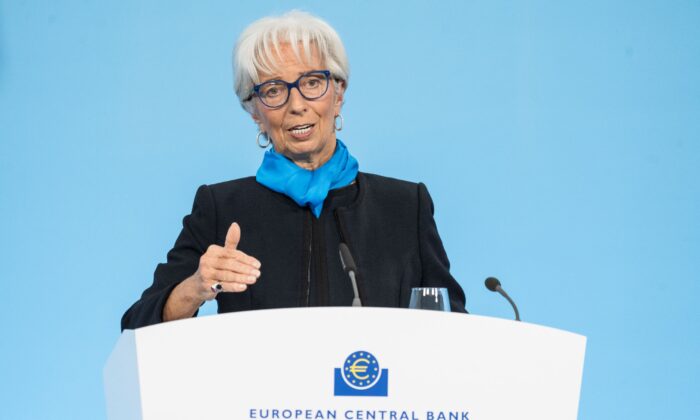 Christine Lagarde, head of the European Central Bank (ECB), arrives to speak to the media following a meeting of the ECB Governing Council in Frankfurt, Germany on Oct. 28, 2021. (Thomas Lohnes/Getty Images)
Economic Policies

ECB Should Not React to Current Inflation Spike: Lagarde

FRANKFURT—European Central Bank President Christine Lagarde said on Friday that inflation in the euro zone will fade so the ECB should not tighten policy as it could choke off the recovery, and hinted at continued bond purchases next year.

Inflation in the euro zone hit 4.1 percent in October, pushed up by higher energy costs, and is expected to stay above the ECB’s 2 percent target next year as suppliers strained by the pandemic cannot keep up with the reopening of the economy.

But Lagarde insisted the ECB should not hit the brake now but rather keep adding fuel to the recovery of the economy.

“When inflation pressure is expected to fade—as is the case today—it does not make sense to react by tightening policy,” she said. “The tightening would not affect the economy until after the shock has already passed.”

The ECB is due to decide on the future of its bond-purchase programmes at its Dec. 16 policy meeting.

While the central bank has already signalled its 1.85 trillion euros Pandemic Emergency Purchase Programme would end in March, Lagarde said asset purchases would still be “important” after that date.

“Even after the expected end of the pandemic emergency, it will still be important for monetary policy— including the appropriate calibration of asset purchases—to support the recovery and the sustainable return of inflation to our target of 2 percent,” she said.

The Bank of England is widely expected to raise rates later this year and the Federal Reserve is winding down its bond-buying programme.

But Lagarde argued that tightening policy now would squeeze household incomes, which are already facing a shock from soaring energy costs that will likely dampen growth.

“In this situation, tighter monetary policy would only exacerbate the contractionary effect on the economy,” she said.

While Lagarde acknowledged that the outlook for inflation had improved after a decade of sluggish price growth, she said the ECB should “nurture” demand.

“As positive demand forces in the economy gain strength, the inflation outlook over the medium term is looking better than it did before the pandemic,” Lagarde said. “So, we should continue nurturing these forces by not withdrawing policy support prematurely.”