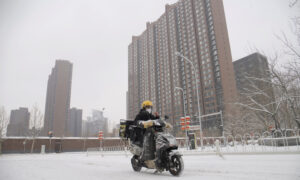 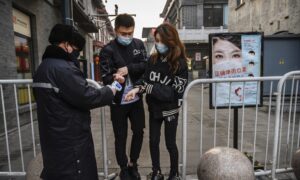 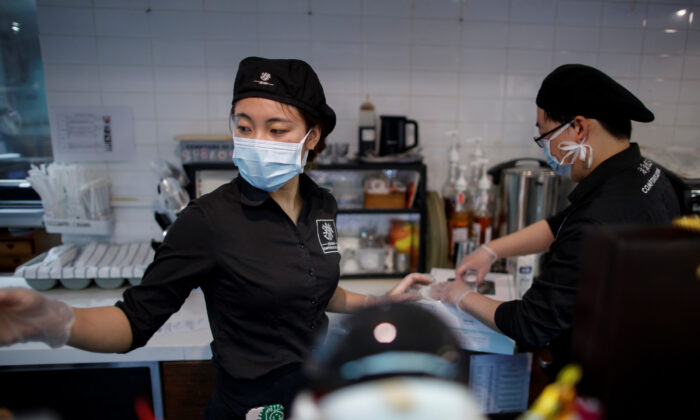 Staff members wearing masks work at a cafe of the French bakery Comptoirs de France in Beijing as the country is hit by an outbreak of the novel coronavirus, in Beijing, China, on Feb. 29, 2020. (Thomas Peter/Reuters)
China Business & Economy

SHENZHEN, China/BEIJING—China is making uneven progress in its return to work after more than a month of coronavirus disruption, with many factories running at under half capacity and office workers avoiding their colleagues.

Yang Lu, who works in sales for a security company in the southern city of Shenzhen, said her office of around 300 people is back to work, but she tries to stay away from people.

“I come to the office earlier than others and leave late,” she said.

Around 80 percent of restaurants and shopping centers have reopened in major cities such as Beijing and Guangzhou, search engine Baidu said on Mar. 5, although traffic is light in restaurants and malls. Over 90 percent of businesses in the large southern province of Guangdong had resumed work as of Tuesday, state media said.

Yet the picture is mixed, depending on location and industry.

While 60 percent of logistics companies across China have returned to work, the government said on Friday, analysis from brokerage Nomura suggests that just 44 percent of businesses in sectors directly affected by the outbreak were up and running as of Mar. 1, up from 37.7 percent a week earlier.

“Reopening a factory is easy. All you need to do is get a guard and hire a few cleaning ladies and you’re all set,” said a government official in the city of Wenzhou, who declined to be identified given the sensitivity of the matter.

“But resuming production is a whole different matter,” he said, noting that market demand, availability of workers, and finding adequate supply of safety equipment like masks are all challenges.

“If someone tests positive for the virus, all of the employees have to be quarantined and you have to pay them at the same time. It is not a fair trade,” the official said.

Don’t Meet Me at the Water Cooler

As white collar workers return to offices, many are reluctant to socialize.

Workplaces are limiting lunchtime interactions while office buildings restrict the number of people allowed in elevators. In much of Beijing, offices are permitted to operate at just 50 percent capacity, and only 30 percent in the Dongcheng district.

An administrative worker at a school in Shanghai said he had been ordered to eat lunch alone at his desk and to report to human resources all the people he has been in “close contact” with each day. Schools in the city remain closed.

Many avoid the office altogether.

A WeWork employee who was not authorized to speak with the media estimated that just 10 percent to 20 percent of workers have returned to the company’s eight Shenzhen offices since the virus broke out. A spokesperson for the company said safety was the company’s priority, without commenting on returnee numbers.

Richard Craggs, chairman of Shenzhen-based catering firm Nom Nom, figures that about 30 percent to 40 percent of workers in the factories it supplies in Guangdong Province are back on the job and said business is down about 80 percent from a year earlier.

Before the outbreak, Nom Nom distributed up to a million meals a month to factories, schools and offices around the province.

Local governments are providing financial support to help businesses stay afloat, with the southern city of Zhuhai offering companies 500 yuan ($72) for each new employee they hire, while paying firms 80 yuan a day to compensate for each employee still under lockdown in Hubei Province.

Fu Rongyao said employees at his factory in the eastern province of Zhejiang, which makes holiday lighting, had heard the government was providing workers stipends of 2,000 yuan per worker.

He says he has received no such benefit and is unsure of how to apply for it. So far only 10 percent of his staff had returned.