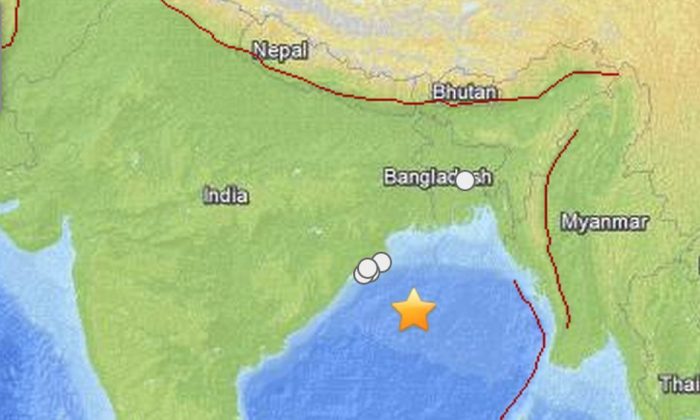 A 6.0-magnitude earthquake struck in the Bay of Bengal near India. (USGS)
India

A 6.0-magnitude earthquake struck in the Bay of Bengal between India and Bangladesh on Wednesday night.

The U.S. Geological Survey, the national quake-monitoring service, said the temblor measured 6.0 on the Richter scale.

The quake was felt in parts of India after it hit.

“The magnitude of the earthquake was 6.0 on the Richter scale and its epicentre was in the Bay of Bengal,” an official with the India Meteorological Department told IBNLive.

“Tremors were felt in Odisha and some districts of West Bengal,” added the official.

The U.S. Geological Survey reports that a magnitude 3.0 earthquake struck 10 miles north-northwest of Chandler at 3:30 a.m. Sunday. It had a depth of 2.3 miles.

A magnitude 2.5 earthquake hit just before 9 a.m. Sunday one mile south-southwest of Stillwater. It had a depth of 2.7 miles.

The third quake was recorded at 1:53 p.m. 13 miles north-northeast of Enid. The magnitude 3.0 earthquakehad a depth of 2.1 miles.

No damage was immediately reported.

Geologists say earthquakes of magnitude 2.5 to 3.0 are generally the smallest that are felt by humans and that damage is not likely in quakes below magnitude 4.0.