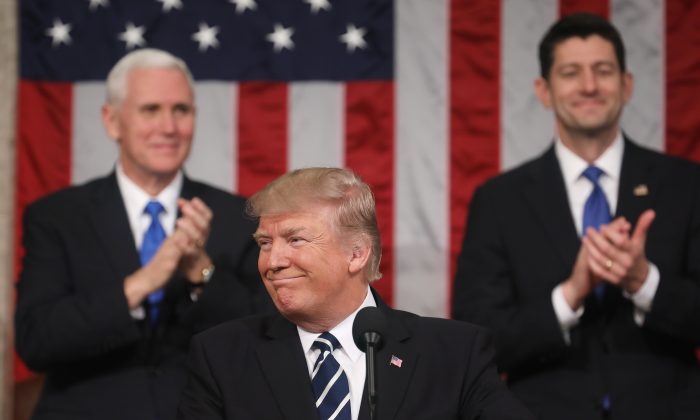 Vice President Mike Pence (L) and Speaker of the House Paul Ryan (R) applaud as U.S. President Donald J. Trump (C) delivers his first address to a joint session of the U.S. Congress in the House chamber of the U.S. Capitol in Washington on Feb. 28, 2017. Trump's first address to Congress focused on national security, tax and regulatory reform, the economy, and healthcare. (Jim Lo Scalzo - Pool/Getty Images)
US

A YouGov/CBS News poll found that 76 percent of those who watched it approved, with 82 percent finding it “presidential,” while 71 percent of viewers—including 36 percent of Democrats—found the speech “unifying.”

An ORC/CNN poll of people who watched Trump’s speech found that 70 percent of respondents are now more optimistic about the future of the United States. Respondents in the CBS/YouGov poll said they’re “more optimistic” about what Trump will try to accomplish following the speech.

About two-thirds said that Trump had the right priorities in mind during the address.

The ORC/CNN poll was carried out over the phone via live interviews, while the YouGov/CBS News poll was complied via the Internet.

After the speech, Trump responded on Twitter, writing a simple “THANK YOU.”