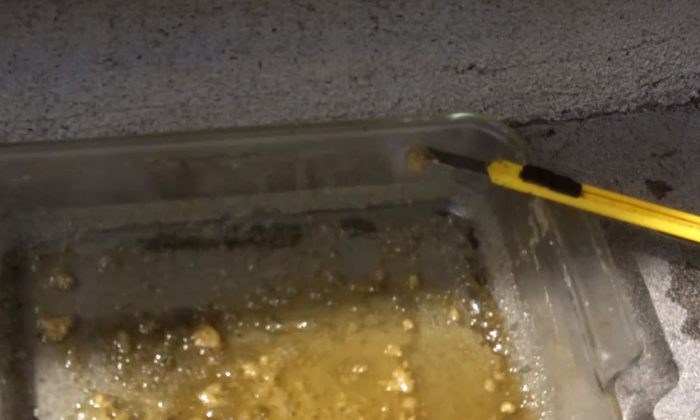 “Ear wax” marijuana–a potent substance with elevated concentrations of THC–has seen an uptick in usage, with a San Jose teen claiming he was high for three days straight. The substance differs from traditional, leafy pot in that it has a waxy, doughy appearance.

In a report on Monday, a 17-year-old named Josh told the San Jose Mercury News: “I felt like I was gonna die. The movie we were watching started to look 3-D. I kept seeing lights.”

Josh, whose named wasn’t disclosed, claimed he was high for three days straight. His grandmother picked him up and drove him to the hospital, and he was then handcuffed to the rails of a hospital bed. He was later arrested.

Ear wax marijuana can contain as much as 80 or 90 percent THC, which is several times more potent than standard marijuana. However, it differs from “Budder,” which is solid hash oil that is whipped into chunks. Some manufacturers say that “ear wax” is what happens when you fail at making Budder, meaning that wax is merely low-grade, whipped hash oil. And unlike some recent media reports, the process has been around for a while, they say.

Josh said that he was hit with $7,000 in fines and got a year of probation but says other than the legal ramifications, he has only started feeling normal again a year after smoking “ear wax.”

“In the 1970s, (people) were primarily smoking the leaves of the plant,” Solano County Alcohol and Drug Advisory told the Mercury News. “Now users are smoking (the more potent) buds of the plant.”

The product is made by using aerosol butane to extract the THC from marijuana stems and seeds that are leftover, resulting in an extremely potent drug, Susan Smolinske of the Children’s Hospital of Michigan Regional Poison Control Center told CBS Detroit in June. She said two people were sent to the hospital last month.

“One puff is equivalent to one entire joint of marijuana,” Smolinske said.

Some users have said they have hallucinated after smoking the substance.

“They had behavior changes….(they) needed to be sedated because they were so agitated that they could not be controlled,” Smolinske said of a man and a woman who were apparently suffering episodes of psychosis after smoking ear wax marijuana.

“We have seen teenagers who end up permanently with a psychotic disorder, because the marijuana has been the trigger for that,” she added.

Colorado high school junior Kelsey Raley told KKCO-11 in March: “It’s just more potent than other drugs and its easier to come by than any other drug and there’s a lot of people that will do that instead of just going out and smoking marijuana or something.”