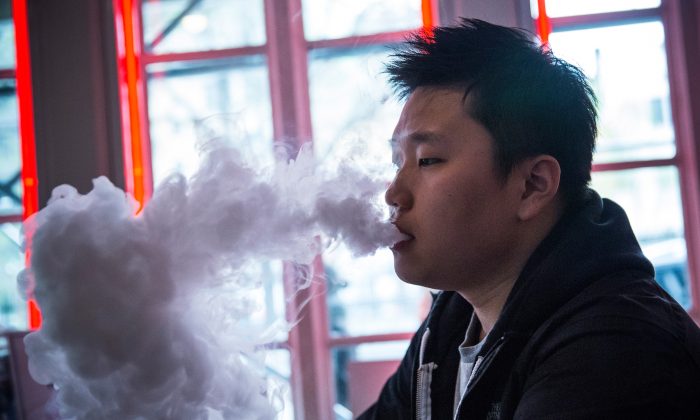 SAN DIEGO—Despite being touted by their manufacturers as a healthy alternative to cigarettes, e-cigarettes appear in a laboratory study to increase the virulence of drug-resistant and potentially life-threatening bacteria, while decreasing the ability of human cells to kill these bacteria.

Researchers at the VA San Diego Healthcare System (VASDHS) and the University of California–San Diego (UCSD) tested the effects of e-cigarette vapor on live methicillin-resistant Staphylococcus aureus (MRSA) and human epithelial cells (the cells that form the outer surface of many organs and cavities in the body).

MRSA commonly colonizes the epithelium (surface membrane) of the nasopharynx (the upper part of the upper throat that lies behind the nose,) where the bacteria and epithelial cells are exposed constantly to inhaled substances such as e-cigarette vapor and cigarette smoke.

Exposure to e-cigarette vapor increased the virulence of the bacteria, helping MRSA escape killing by antimicrobial peptides and macrophages. However, she added, the vapor did not make the bacteria as aggressive as cigarette smoke exposure did in parallel studies her group conducted.

To conduct the e-cigarette vapor experiment, the researchers grew MRSA (USA 300 strain) in culture with vapor concentrations similar to inhalers on the market. They tested first for biochemical changes in the culture known to promote pathogen virulence and then introduced epithelial cell- and alveolar macrophage-killing assays.

The study was presented at the 2014 American Thoracic Society International Conference.

Crotty Alexander said that one possible contribution to the increased virulence of MRSA was the rapid change in pH induced by e-cigarette vapor. Exposure changed the pH from 7.4 up to 8.4, making the environment very alkalotic (basic pH) for both bacterial and mammalian cells. This alkalosis stresses the cells, giving them a danger signal, leading to activation of defense mechanisms.

These changes make MRSA more virulent. However, when MRSA is exposed to regular cigarette smoke, their virulence is even greater. Cigarette smoke induces surface-charge changes 10-fold greater than that of e-cigarette exposure, alters hydrophobicity, and decreases sensitivity to reactive oxygen species and antimicrobial peptides.

In a mouse model of pneumonia, cigarette-smoke-exposed MRSA had four times greater survival in the lungs and killed 30 percent more mice than control MRSA. E-cigarette vapor exposed MRSA were also more virulent in mice, with a three-fold higher survival.

Unfortunately, while e-cigarette vapor is increasing bacterial virulence, Crotty Alexander has found that the vapor is also decreasing the ability of human epithelial cells to kill pathogens.

“As health care professionals, we are always being asked by patients, “Would this be better for me?” Crotty Alexander said. “In the case of smoking e-cigarettes, I hated not having an answer. While the answer isn’t black and white, our study suggests a response: Even if e-cigarettes may not be as bad as tobacco, they still have measurable detrimental effects on health.”