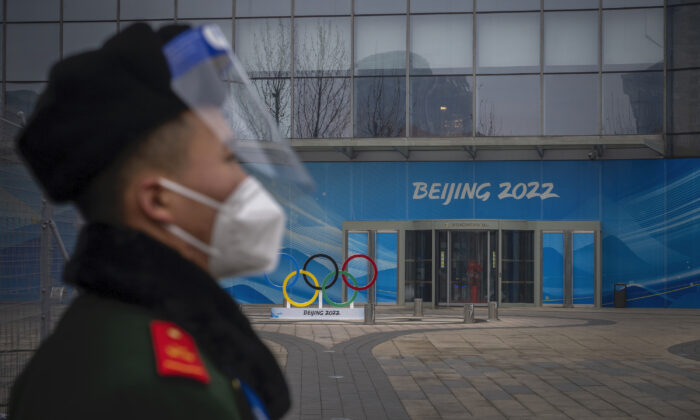 A security guard stands behind a barricade in an area not accessible to the general public, which will host the 2022 Winter Olympics at Olympic Park in Beijing on Jan. 23, 2022. (Andrea Verdelli/Getty Images)
Thinking About China

The Olympics used to be about the unbridled spirit of athletes, of the best of the best pursuing the Olympic motto of “faster, higher, stronger” in competition on a world stage for their country’s glory and their own.

The Olympics used to be about the three hallowed Olympian values—excellence, respect, friendship—that spoke of lifelong bonds forged in honest competition on level playing fields.

No longer. The 2022 Beijing Winter Olympics is more about the prowess of the Chinese Communist Party (CCP) than that of the athletes, more about China’s herculean measures to contain COVID-19 through an 11,000-person bubble spanning three competition zones, 111 miles apart. In 2022, the CCP’s goal won’t be to nurture the Olympic spirit but to stifle it by policing the Olympians’ every move, all to impress on them that they’re under a cloud of suspicion where a misstep could lead to banishment from the Games, or worse.

The CCP fears that some Olympians will engage in acts of solidarity with Peng Shuai, the Chinese tennis star who for weeks disappeared after reporting that she had been raped by the head of a government working group on the Olympics, and who is believed to have subsequently recanted her accusation under duress. Or that Olympians will protest the CCP’s genocidal treatment of Uyghurs, or its takeover of Hong Kong, or its organ harvesting of Falun Gong practitioners. Or that some Olympians might simply object to being perceived as useful idiots whose very presence in Beijing acts as an endorsement of the CCP, effectively helping to whitewash its human rights abuses.

To minimize that risk, the CCP is requiring all Olympians to subject themselves to 24/7 surveillance through an app that Citizen Lab, University of Toronto’s digital anti-espionage team, determined will give the CPP wholesale access to the athletes’ sensitive historical data along with real-time activities, such as the athletes’ “voice audio and file transfers.” The app “includes features that allow users to report ‘politically sensitive’ content. The app also includes a censorship keyword list, which, while presently inactive, targets a variety of political topics including domestic issues such as Xinjiang and Tibet as well as references to Chinese government agencies.”

The CCP is unabashedly frank in explaining its need for this surveillance, which will complement its monitoring of activities on athletes’ phones and other devices, as well as in hotel rooms and the athletes’ dorms. As put by the CCP’s Yang Shu, deputy director general of international relations for the Beijing Organizing Committee, “dedicated departments” will be evaluating the conduct of athletes. “Any behavior or speech that is against the Olympic spirit, especially against the Chinese laws and regulations, are also subject to certain punishment.”

From the athletes’ perspective, the upcoming Winter Olympics in China is all upside down—the most chillingly dystopian Olympics in history.

Even if athletes perfectly censor themselves and take care to talk of nothing in any way controversial, they know that the CCP may decide to invent infractions to punish athletes or their countries, as an example for all the others of the consequences of stepping out of line.

Or the CCP might decide to use its control over COVID testing to favor China’s medal contestants by taking other countries’ top rivals out of the running. The widespread expectation that such manipulation is in play can be seen in journalists’ skepticism, such as in CBC Sports questioning the “subjectivity” of the CCP-dominated medical expert panel that will assess which athletes can compete and which can’t.

Athletes who survive the surveillance, and who haven’t been taken off the playing field by China’s gaming of the COVID rules, can then participate in a final dystopia. None of the athletes’ own countrymen will be sitting in the stands, waving their national flags to spur them on. The spectators in the stands will all be hand-picked by the CCP—a final testament affirming for whom the 2022 Winter Olympic Games will be held.