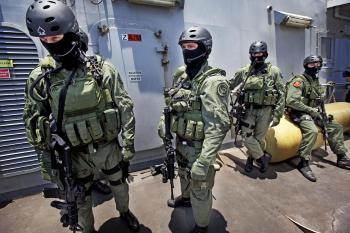 A special team on board the Dutch mission ship 'Evertsen' practiced capturing pirates at sea on Sept. 23 in the Indian Ocean. (Robin Utrecht/AFP/Getty Images)
Europe

Jasper Fakkert
Editor-in-Chief, U.S. Editions
Jasper Fakkert is the Editor-in-chief of the U.S. editions of The Epoch Times. He holds a Bachelor's degree in Communication Science and a Master's degree in Journalism. Twitter: @JasperFakkert
View profile
Follow
biggersmaller
Print
The Dutch navy caught 13 Somali pirates on Wednesday in waters 150 miles off the coast of Oman, after an unsuccessful hijacking attempt of a merchant ship by the pirates.

The pirates used small and swift skiffs and rifle fire in their attempt to enter and hijack the BBC Togo. The ship, sailing under the flag of Antigua and Barbuda, an island group in the Caribbean Sea, managed to prevent the pirates from entering. After the failed attempt, the pirates retreated to a nearby dhow, an Arab-style fishing vessel.

On Wednesday evening the Dutch navy vessel Evertsen found the dhow with two small skiffs hanging behind it.

On board, the Navy crew found large amounts of weapons, including AK-47s, grenade launchers, ammunition, entering hooks, and ladders, according to a press release from the Dutch Ministry of Defense.

Thirteen alleged pirates were arrested on the dhow. Two Tanzanian fishermen on the ship said that they were kidnapped by the pirates months ago, after which their ship served as a mothership for the pirating activities.

Since the beginning of the ’90s the waters around Somalia have been plagued by pirates hijacking ships. The Navy ship Evertsen is part of the EU NAVOR, a mission involving ships and airplanes of EU member states deployed in the region since December 2008 to protect vessels passing trough.

The EU has agreements with neighboring Kenya and Seychelles to deport pirates to them. The two Tanzanian fishermen have been released.