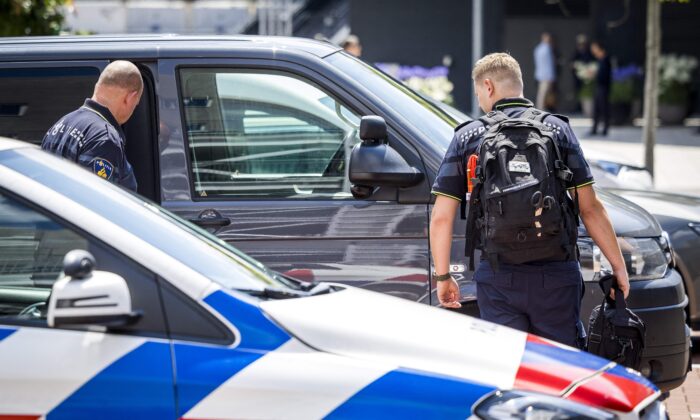 Protests continue in the Netherlands over the government’s proposed nitrogen policy, which could necessitate the mass slaughter of livestock and potentially shut down almost a third of the country’s farms at a time when global famine may be imminent.

Events in the country are being compared by commentators and politicians around the globe to the World Economic Forum’s “Great Reset.”

Dutch farmers, truckers, and others have used social media in a decentralized way to organize blockades of food distribution hubs across the coastal northwest European country.

Officials at Albert Heijn, a major Dutch grocer, didn’t respond by press time to a request by The Epoch Times for comment.

However, the high-profile protests on July 4 didn’t affect operations at Eindhoven Airport, one of several airports targeted in a Telegram post that went viral in the preceding days.

“We will keep on monitoring the situation day by day,” an Eindhoven spokesman told The Epoch Times on July 5.

In addition, a spokesperson for the Dutch Ministry of Defense told The Epoch Times the ministry wasn’t asked by government to provide support in policing protests on July 4.

‘Farmers Are the Heart of the Country’

Mark de Jong, a protester and the owner of a transportation company that employs 30 people, told The Epoch Times on July 2 that his country’s nitrogen crisis is caused by the Dutch government and the European Union (EU).

“The farmers are not the problem—they are the people who have always looked after the land and nature,” he said.

Thierry Baudet, a member of the Dutch House of Representatives, offered a similar perspective in a July 5 interview with The Epoch Times.

Baudet, who leads the Forum for Democracy party, traced the current conflict to Natura 2000, an EU network of conservation areas established in 1992 through the Habitats Directive. More than half of the country’s nationally protected areas are also covered by Natura 2000.

Yet, in the decades since the founding of the network, nitrogen deposition due to agricultural activity—including from ammonia produced by livestock manure—has already begun showing a change in plant species that grow in the Netherlands.

That shift conflicts with the Habitats Directive, which mandates the careful conservation and maintenance of habitats and species protected as part of the Natura 2000 network.

“At the time, politicians having always been as stupid as they are now, nobody was thinking ahead and wondering, look, what might this mean in the future?” Baudet said.

“We are politically facing a sort of a bureaucratic problem because the Netherlands has agreed with the EU that it will protect [existing plant species], but now because of increased population, more cattle, and so on, we’re going to have a change in vegetation in the country.”

Baudet and some of his colleagues have pushed for more relaxed nitrogen greenhouse gas emissions standards in the Netherlands, in line with standards in Germany.

Yet, as part of a 2019 debate over the topic, then-Minister of Agriculture Carola Schouten asserted that “the regulations must be stricter” in the Netherlands, as reported by the Dutch Broadcasting Foundation.

“What our politicians are doing is creating this whole fake narrative on nitrogen oxides being very poisonous and very dangerous and pollutants for the environment,” Baudet told The Epoch Times. “By putting forward that narrative, they are able to sell this project—the expropriation of our farmers.”

“Willem,” a trucker who preferred to use a pseudonym, told The Epoch Times on July 2 that he doesn’t care if he’s arrested while protesting. His livelihood, he said, depends on the farmers near him.

“If they want to close the farmers here, I don’t have a job anymore.

“The farmers are the heart of the country, and that’s why we’re fighting,” he said, noting that he himself comes from a farming family.

Speculation has grown about undercover police—dubbed “Romeos” by the Dutch—sparking violence during otherwise peaceful protests.

One video on June 28 appears to show masked men in civilian clothes rushing toward a building, then backing away before entering a van with the insignia of the Dutch National Police.

Baudet described as “very suspicious” the proliferation of footage allegedly depicting agent provocateurs, adding that the farmers with whom he has spoken don’t advocate violent tactics.

“If there were actually farmers who were doing it, then that was an absolute fringe of the total population,” he said.

He compared the suspected “Romeos” to the undercover agent provocateurs alleged to have provoked violence at the U.S. Capitol on Jan. 6, 2020.

“It is certain that undercover agents are deployed during demonstrations. That is not denied by the government,” said Gideon van Meijeren, another member of the House of Representatives who belongs to Forum for Democracy, in a July 5 interview with The Epoch Times.

Representatives of the Dutch National Police didn’t respond by press time to a request by The Epoch Times for comment.