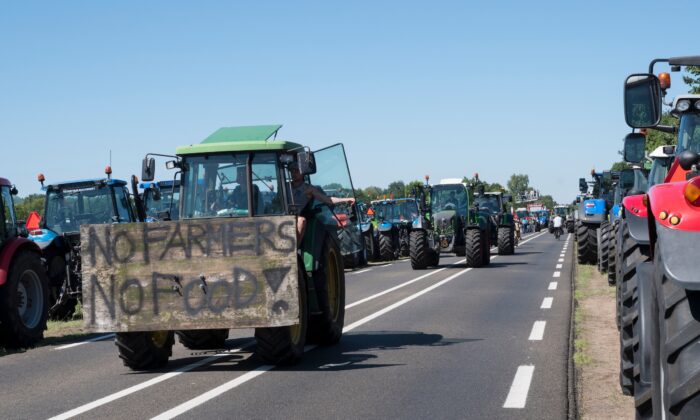 Dutch farmers are protesting against what they see as harsh measures to cut down nitrogen emissions. (PMVfoto/Shutterstock)
Europe

'We now treat farmers as polluters ... which is a very strange perspective'
By Nathan Worcester

Jaap Hanekamp is skeptical of the received wisdom in science. He won’t stop asking a simple question: “But is this true?”

When it comes to the Dutch government’s calculations of ammonia and nitrogen oxide deposition—the basis of climate mandates that would slash livestock numbers and put many farmers out of work—Hanekamp is especially critical of “the science.” He thinks it relies on vague definitions, excessive deference to expert judgment, and a narrow focus on costs rather than both costs and benefits.

“We now treat farmers as polluters, end of story, which is a very strange perspective,” he said.

Hanekamp, an associate professor of chemistry at University College Roosevelt in the Netherlands, made the comments in an interview with Roman Balmakov, host of EpochTV’s “Facts Matter.”

A 2019 Dutch court decision that hindered the construction of livestock facilities triggered a round of protests by farmers. A Science article on the protests described some of the harms attributed to nitrogen emissions.

“In dunes, bogs, and heathlands, home to species adapted to a lack of nitrogen, plant diversity has decreased as nitrogen-loving grasses, shrubs, and trees move in.”

He believes that the government has focused on nitrogen almost to the exclusion of other factors that affect nature, such as the location of groundwater relative to the surface.

Hanekamp also questioned whether the ecosystem shifts prompted by greater nitrogen deposition can be properly defined as “damage.”

“Is a change in biodiversity bad in itself, or is it just change?” he asked.

He pointed out that the Netherlands is far from pristine wilderness. Much of the land is artificial, reclaimed from the sea over recent centuries because of the ingenuity of man.

Below its “critical load,” a substance isn’t thought to pose a significant environmental threat.

In a recent paper, Hanekamp and co-author William Briggs described some problems with the evidence used to define nitrogen critical loads in the Netherlands.

They don’t believe the definitions of nitrogen critical loads are sufficiently precise. They also think there haven’t been enough large-scale, long-term studies on nitrogen deposition.

Hanekamp stressed that models can be useful—taking 100,000 measurements across the country wouldn’t exactly be easy or cheap. Yet modeling uncertainty makes it challenging to translate activity on a particular farm to exact patterns of nitrogen flow.

That didn’t stop the Dutch nitrogen minister from unveiling detailed, area-specific nitrogen reduction targets in June. The release was the impetus for the latest round of protests by farmers.

One dairy farmer interviewed by The Epoch Times would have to slash his livestock numbers by 95 percent—so much that he expects he’ll need to shut down.

“We have created the illusion of certainty with respect to emission and deposition. That’s definitely a mirage of policymaking,” Hanekamp said. “The problem is that the Dutch government decided that these critical loads are definitive with respect to the quality of the habitats we have. And that’s a very strange approach to this issue.”

He worries that a comprehensive, societal risk-benefit analysis hasn’t occurred. He thinks the ultimate outcome of the government’s climate proposals remains deeply uncertain.

“If we would implement these and we would kick out, say, one-third of the farmers, we still don’t know what the result would be related to these critical loads, which doesn’t make any sense,” Hanekamp said. “Yeah, we [would] know that one-third of the farmers [are] gone, and that basically, we’re reducing production and income as a country, but the return of investment in the focused nature? We have no idea.”