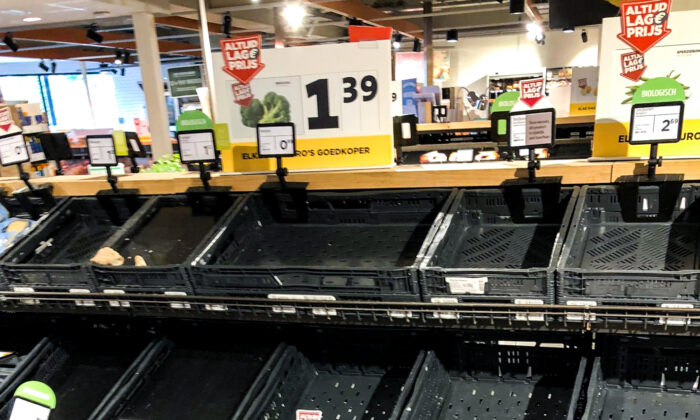 A supermarket with empty shelves due to delays in truck deliveries as a result of protests by farmers and truckers in the Netherlands on July 5, 2022. (Special to The Epoch Times)
Europe

Food Shortages Looming in Near Future Due to Governments’ Globalist Policies

Joshua Philipp
Joshua Philipp is an award-winning investigative reporter with The Epoch Times and host of EpochTV's "Crossroads" program. He is a recognized expert on unrestricted warfare, asymmetrical hybrid warfare, subversion, and historical perspectives on today’s issues. His 10-plus years of research and investigations on the Chinese Communist Party, subversion, and related topics give him unique insight into the global threat and political landscape.
View profile
Follow
and Roman Balmakov

Those familiar with the most recent farmer protests in the Netherlands are saying that the Dutch government’s climate nitrogen-reduction policies targeting farmers, actually have a nefarious goal. Dutch farmers see it as an effort to seize their land and experts say these climate policies are a part of a global agenda to control the means of food production, that if allowed to play out will end in a global food crisis.

Michael Yon, a journalist who has covered numerous major events and who is currently in the Netherlands covering the farmer protests, told The Epoch Times that the Dutch government is not alone in targeting their farmers, many other countries’ farmers are also experiencing the same threat.

“The dark cult of Davos [World Economic Forum] is trying to destroy these farmers, and obviously, this has major security consequences, not just for the Netherlands, but for all of Europe and the world,” Yon said during a recent interview with Epoch TV’s Crossroads program. “They’re trying to put these farmers out of business and trying to confiscate their land.”

The Coming Food Crisis Is Manmade; the Globalists’ Agenda Against Farmers and Fertilizers

Hundreds of Dutch farmers and many truckers are trying to bring attention to the government’s proposed policies which if implemented would effectively handicap the farmers and many would be financially ruined. In an effort to capture the public’s attention, the Dutch farmers are blocking roads and infrastructure that distribute their goods, leaving Netherlands’ store shelves empty.

“Many people are not tracking, many are and tend to be highly supportive of the farmers, but many are just going about their daily lives just like Americans and Canadians and others do,” Yon said.

“They need to get that wake-up call, like listen, you are going to get hit sooner or later; would you rather have your shelves empty now for just a really short time, or be under the thumb of the beast [World Economic Forum] forever,” he said.

Compared to the United States, the Netherlands is a fraction of the size, but rivals U.S. food production, sitting at number six in food exports. The Dutch farmers are some of the most knowledgeable and most efficient in the world, Yon said.

“These are the best farmers in the world. They are worth more than their farms because you can take them and make great farms anywhere with the knowledge in their hands,” he added.

Many countries including the Netherlands, Canada, Germany, and Sri Lanka are following a similar agenda to reduce nitrogen in the environment by at least 30 percent. Many other countries’ farmers, including the United States, cannot find enough chemical nitrogen fertilizer to grow their crops.

If the government implements their nitrogen reduction policies, the Dutch farmers say most of them will lose their farms and their livelihoods, as well as create massive food insecurity for their country and the world.

Exclusive: On the Ground With the Farmers Blockade; True Reason Why Elites Plan to Confiscate Land | Facts Matter

The Dutch farmers are protesting because they have no other way to try to save their farms and food production in the Netherlands, Reindert a 30-year-old dairy farmer told Epoch TV’s Facts Matter host Roman Balmakov.

If the government wins this conflict, his farm would have to kill off about half of its cows, to reduce nitrogen, said Reindert which would make their business financially unsustainable.

Ultimately, “They just want to remove the farmers from the land,” Reindert said.

The larger group of farmers that Balmakov spoke to said the country’s media outlets are taking the side of the government and painting their protest in a bad light and falsely saying the farmers are poisoning the land. The Dutch farmers urged Americans to support their protest and Dutch goods.

Meanwhile, Thierry Baudet, a Dutch parliamentary leader in the opposition party the Forum for Democracy, said that the Dutch government is following a globalist agenda and agreed their goals are evil.

Baudet believes the current Dutch administration wants to end the Netherlands’ means of food production and sovereignty, to make the people fully depend on the government.

“The people governing this country are following the script written by the EU to realize what they call a great reset. They want to make us more dependent on international supply chains,” Baudet said during a recent interview with Epoch TV’s Facts Matter program.

The EU’s Natura 2000 guidelines, which stipulate that the Netherlands needs to reduce nitrogen in their environment is outdated and needs to be terminated, Baudet added.

The guidelines, say that “certain areas in Europe were picked for the preservation of certain forms of vegetation, and as it happens, the Netherlands was picked to protect moss and clover,” said Baudet.

“The real agenda behind that [Natura 2000] is that they want to have a stick to beat the farmers with and it’s not just to facilitate the continuous immigration,” but the broader and “spiritual” agenda is to end the farmers’ connection to their land and traditions, said Baudet.

“The real point here is the great reset, mass migration, transnational governance, and that’s why people have to become atomized, they have to lose their connection to the land, and that’s why they’re hitting on the farmers,” he said.

The Netherlands’ news media, which is loyal to the ruling political party, is maligning the farmers by saying that they are poisoning the land with nitrates and ammonia, Yon said.

Yon likened the demonization of Dutch farmers and the government’s land grab effort to what happened under many totalitarian regimes, including China, Cambodia, and Russia.

Joshua Philipp, an investigative reporter and host of Epoch TV’s “Crossroads” program, said he has found an undeniable large-scale trend toward seizing control of food production around the globe.

“I will say absolutely now definitively that this is an agenda. This is not a natural crisis,” Phillip told his Crossroads audience in a recent episode.

A recognized expert on unrestricted warfare, asymmetrical hybrid warfare, and expert on Chinese Communist Party subversion, Philipp said his research on the nitrogen reduction policies and chemical fertilizer trends in the majority of countries around the world will lead to food shortages, like what happened in Sri Lanka recently.

Phillip called Sri Lanka’s crop failures and food shortages, “the canary in the coal mine,” warning the world about what could end up happening if they don’t change the direction their governments are taking them in terms of nitrogen reduction standards and fertilizer use.

Baudet is not optimistic about the farmers’ impact on stopping this globalist agenda but said there is a chance if there is true solidarity amongst the farmers and they hold out for a few days or weeks and refuse to do any food distribution, then they might be able to wake up the Dutch public and hence change government policies.

“A radical agenda is being pushed, which is called the Sustainable Development Goals, which is all the climate hysteria of which scientifically [is] bonkers,” Baudet said.

The globalists (World Economic Forum) set 2030 as the year to meet their economic goals and take over, but Baudet said that citizens around the world have to work to make sure their agenda is not realized.

If you look at the large picture, “You see this trend towards bureaucratic dictatorship that is being imposed on all of us, and only if we unite and if we surpass all these differences that have divided us for so many years, and we fight this together, can we succeed, and we must do it,” said Baudet.

“It’s the single most existential fight in the history of civilization,” he added.