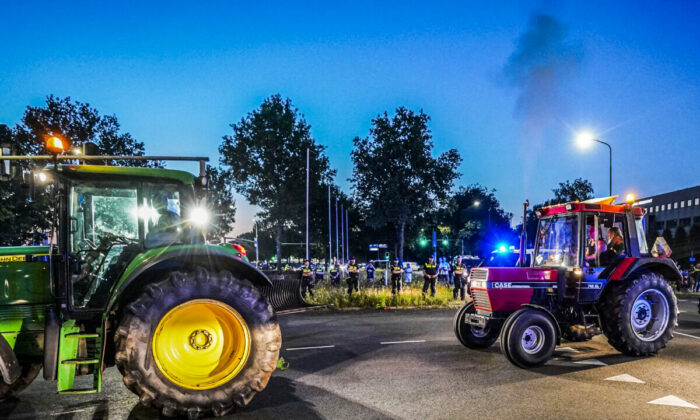 Dutch farmers are continuing their demonstrations against a government climate policy that officials expect to end many farmers’ livelihoods, with organizers on Telegram planning July 4 protests they say will “flatten” the whole of the Netherlands.

The message calls on concerned farmers and citizens to organize their own regional actions with the goal of closing all “distribution centers for food supplies and all major polluters” until “the government changes its plans.”

One viral call for a July 4 protest came from a large truckers’ Telegram group, suggesting that some truckers in the Netherlands may find themselves in solidarity with the nation’s agriculturalists.

The farmers, who plan to protest at many of the nation’s airports, specifically mentioned Schiphol and Eindhoven. NLTimes.nl has reported that spokespersons for both airports say they are monitoring the situation but have little information at present.

The Epoch Times reached out to both airports for comment but didn’t receive a response by press time.

The country has already implemented stringent restrictions on new construction with the aim of curbing nitrogen greenhouse gas emissions.

Rabobank has argued that those new hurdles have slowed down homebuilding in the Netherlands, intensifying a housing shortage in the densely populated coastal nation.

On June 10, the government issued a national and area-specific plan for curbing nitrogen greenhouse gas emissions. Those emissions are heavily driven by ammonia from livestock manure.

Some parts of the country would have to slash those emissions by 70 or even 95 percent.

It openly acknowledged that “there is not a future for all [Dutch] farmers within [this] approach,” as reported by the U.S. Department of Agriculture’s Foreign Agriculture Service.

“The Minister of Nature and Nitrogen Policy expects about a third of the 50,000 Dutch farms to ‘disappear’ by 2030,” the New Zealand Ministry of Foreign Affairs and Trade reported in a June 23 Market Insight Report.

The Netherlands is the world’s fifth-largest exporter of food, exceeded only by the United States, Germany, the United Kingdom, and China, according to World Bank statistics.

The Dutch government offers a multibillion-dollar buyout arrangement for farmers.

Christianne van der Wal, minister of nature and nitrogen policy, has left open the possibility that the government will expropriate land from farmers who don’t comply, as reported by NOS Nieuws.

The proposals and resultant protests come amid worldwide fertilizer and food shortages.

United Nations Secretary-General Antonio Guterres warned on June 24 that “there is a real risk that multiple famines will be declared in 2022,” adding that “2023 could be even worse.”

He said the expenses of running his own operation have tripled, driven in large part by significantly increased fertilizer costs.

In Sri Lanka, a ban on chemical fertilizers contributed to an economic crisis that has destabilized the government.

The country has recently announced a temporary ban on fuel sales to private vehicles, effective June 27 through July 10.

The latest round of demonstrations by Dutch farmers comes after a wave of similar protests in 2019 after lawmaker Tjeerd de Groot called for livestock numbers in the Netherlands to be cut by 50 percent.

Demonstrators have burned hay bales alongside highways, blocked roads with tractors, and spread manure to make their anger known.

Rutte criticized protesters, saying, “You can demonstrate, but in a civilized way,” as reported by The Associated Press.

AP also reports that Dutch police say they arrested 10 people on June 28 in connection with the protests.