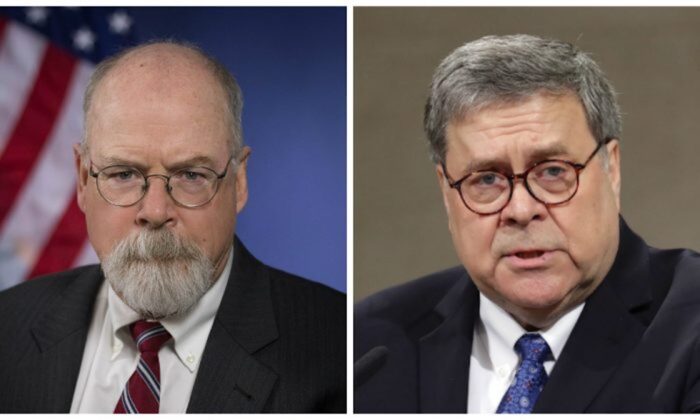 On Dec. 1, U.S. Attorney General William Barr finally confirmed what I’ve long suspected for more than a year and a half. Barr officially released a letter in which he announced that U.S. Attorney John Durham of Connecticut has been designated as a new special counsel.

The letter is dated Oct. 19, which means that for more than 40 days since Barr wrote it, nothing leaked about Durham’s increased prosecutorial powers.

And that’s not all that Barr revealed in that explosive letter. Barr also made it clear the scope of Durham’s criminal investigation had been expanded dramatically.

Durham was originally tasked with discovering how the 2016 presidential campaign of Donald Trump ended up having a counterintelligence investigation dubbed Crossfire Hurricane started up, complete with Foreign Intelligence Surveillance Act (FISA) surveillance warrants that were granted based on what turned out to be fake evidence that had been concocted by political operatives working for Hillary Clinton.

Beginning in April when U.S. Attorney Jeffrey Jensen first surfaced to hand off explosive documents to retired Lt. Gen. Michael Flynn’s lead defense attorney Sidney Powell, it had become apparent the previous special counsel’s office led by Mueller had joined into an alleged conspiracy with the FBI to frame Flynn for a nonexistent crime. The more documents Jensen found and gave to Powell, the greater the Mueller team’s culpability in wrongly prosecuting the general became.

All the documents from the first several batches (pdf) that Jensen gave to Powell bore the official stamp of the Mueller special counsel’s office, which meant they knew the entire time there was no real predicate for a criminal investigation into the former head of the Defense Intelligence Agency. And yet they prosecuted Flynn anyway.

So explosive were those documents Jensen found that the Department of Justice quickly moved to dismiss the case against Flynn on May 7. This led to presiding judge Emmet Sullivan refusing to issue a ruling for more than six months for his own political reasons, until he finally made a dismissal order on Dec. 8.

I was writing columns six months ago pointing out the possible criminal liability problems raised by the conduct of the Mueller team in the Flynn case. And now it has been officially confirmed by Attorney General Barr that Durham is indeed investigating the Mueller special counsel team with his own special counsel’s office.

How’s that for a plot twist?

From the start when Barr introduced Durham in May 2019 as the person who would be leading the investigation of how Spygate happened, something seemed off about it to me.

It seemed strange for a regular U.S. attorney from one state essentially investigating what amounts to an entire previous administration of former White House people, CIA, and FBI directors, State Department officials, and so forth.

Although persons targeted in Durham’s Spygate investigation are now former top government officials, these people are still key power brokers in the Washington system of corruption.

This kind of investigation strongly called for a special counsel that could span the entire nation as well as the various federal agencies without running into any messy jurisdictional limitations.

That’s why the moment I heard that Durham had taken his probe international by traveling with Barr to Italy, the United Kingdom, and also Australia, I said to myself, “If even national borders can’t limit Durham, is he still just a U.S. attorney at this point?”

My take is that Barr is revealing the true nature of Durham’s work as an officially designated special counsel at this point to lessen the explosive impact of forthcoming indictments.

Mueller issued over 30 indictments before his special counsel ended and he released his final report. I can already feel the suspense building over how many Durham is going to unseal before he issues his own.