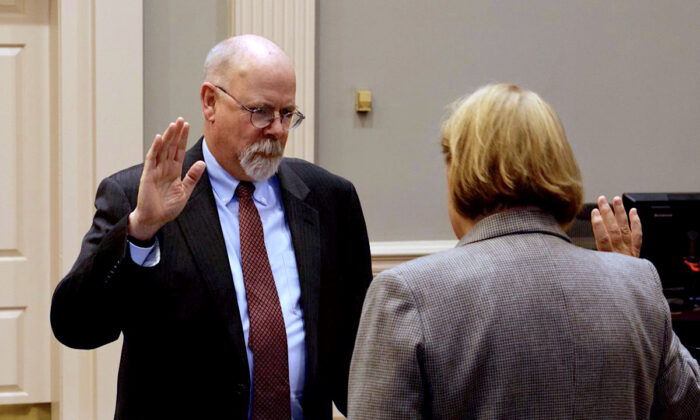 John Durham, the man chosen by former Attorney General William Barr as special counsel to unearth possible malfeasance before and during the Trump–Russia investigation, is a sly fox, in the best sense.

Just when people, including Donald J. Trump, have written him off, complaining that he wasn’t doing anything, that his investigation was a sham, he quietly dumps information that creates a political earthquake.

That those known Trump–Russia liars—The New York Times and The Washington Post—have, as of this writing, and it’s been a few days, not even dared to report Durham’s latest court filing is a sure sign that it’s indeed a serious quake, with potential aftershocks to come.

But before I go further, I would like to call attention to the principle of jurisprudence “Falsus in uno, falsus in omnibus” (False in one thing, false in all). Although written in Latin, it’s English common law from the early 17th century, stating that “a witness who testifies falsely about one matter is not credible to testify about any matter.”

While this may not always be true, it frequently is and most people apply it in their daily lives. When someone lies to us, we cease to trust them. It’s common sense from common law.

So back to Durham’s latest filing. Jack Phillips reported right here in The Epoch Times.

“Durham said in a court filing that the spying took place in order to establish an “inference” and “narrative” to tie Trump to the Russian government.”

Electronic spying on the White House at the behest of the Democratic Party? It’s what you would expect from Chinese or Russian intelligence. And we thought the Mueller investigation was bad.

And talk about strange cases of projection. The Democrats were accusing Trump of colluding with Russia while they were behaving like the KGB.

Trump himself responded that this is worse than Watergate, and he’s surely correct. Watergate, it will be recalled, was about a small-time break-in at Democratic National Committee headquarters during an election that Republicans won by a historic landslide. Although not to be excused in the slightest, politically, it couldn’t have been more irrelevant.

All of this recent eavesdropping occurred during the tightest of elections (2016) and afterward during an actual presidency. It was clearly aimed at destroying that presidency, sabotaging from within—a genuine insurrection, instead of the phony one we know about. Nothing remotely like that has happened in our history.

And it was all instigated by people close to Hillary Clinton or quite possibly by Clinton herself. We don’t know yet. One of the people involved that we do know about was Jake Sullivan, currently our national security adviser, charged with overseeing the conflict on the Ukraine–Russia border. Think about that. What a disgrace to our country that is. If you and I know about it, every nation in the world knows about it.

This evolving scandal—atrocity might be a better word—has most probably eliminated Clinton from the Democratic presidential sweepstakes. It may even sweep up President Joe Biden.

But wait, as they say, there’s more. Or could be.

Let’s go back to English common law—“falsus in uno” and all that.

“One of the most contentious claims Donald Trump ever made was his insistence that he had been the target of spying. He made the charge in several different ways. For example, in March 2017, Trump, just two months in office, tweeted, ‘Terrible! Just found out that Obama had my ‘wires tapped’ in Trump Tower just before the victory. Nothing found. This is McCarthyism!’ [Actually, it’s something worse than that.]

“Each time, all the usual anti-Trump voices rushed to accuse the president of lying. But over the years, a series of facts emerged that, while they did not support some of Trump’s most specific charges—Obama did not wiretap Trump in Trump Tower—did support the larger idea that Trump was indeed the target of spying.”

Wait a minute, Byron. How do we know that Barack Obama had nothing to do with this? The investigation is far from complete and, well, “Falsus in uno, falsus in omnibus.” (We could also include Hillary’s missing emails on that “omnibus.” And a lot of other things.)

Did you ask Trump if he had evidence of this, Byron? He well might. His track record isn’t bad.

I don’t mean to pick on York, someone I know and who’s a fine journalist, but he’s also sure that the 2020 election was fair and that Biden won.

I would like to ask him a question: Are people capable of breaking into the computer servers of the president of the United States—a national security issue of tremendous implications—capable, morally and practically, of fixing an election?

Whether Durham’s work will tell us more about that, I don’t know. But he appears to be opening the door on a lot of things. We’ll see if he walks in. It certainly won’t be easy.

But maybe, just maybe, after more than 2,000 years, Diogenes has finally found his honest man in John Durham.