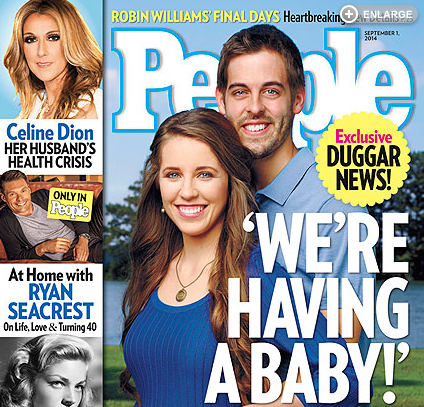 The couple was married on June 21 in Springdale, Arkansas.

“We’re having a baby!” Jill told People Magazine. “We are so excited.”

“After taking several pregnancy tests that came back negative, Jill was persuaded by her sisters to take one of her mom Michelle’s tests while she and Derick were visiting her parents’ home. This test gave her a very different result – it was positive!” it reported.

“It was surreal,” Derick added. “We were shocked. Both of us are so excited.”

Jill’s father Jim Bob Duggar added that the couple gathered everyone in the living room to share the news.

“Everyone was clapping and cheering, and we were in shock, too,” he said.

Meanwhile, the first trailer for season 19 of the hit show 19 Kids and Counting has been released.

The season will feature Jill and Derick’s wedding as well as focus on Jessa and Ben’s relationship, among other aspects of the growing family.

The season is set to premiere on September 2 on TLC.