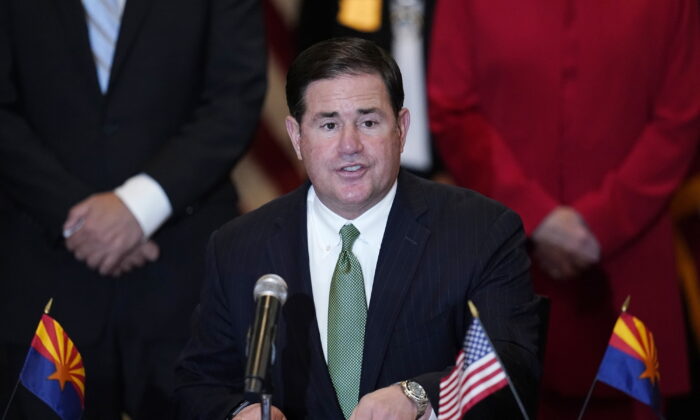 Outgoing Republican Gov. Doug Ducey has congratulated Secretary of State Katie Hobbs, a Democrat, who was named his successor after the midterm elections, which her GOP opponent Kari Lake has not conceded while disputes play out.

Ducey met with Hobbs on Wednesday, two weeks after Election Day, amid reports of widespread problems at voting sites in Maricopa County revealed in a memo written by attorney Mark Sonnenklar. Sonnenklar was one of 11 roving attorneys working with the Republican National Committee’s (RNC) Election Integrity program in Maricopa County.

“Today I congratulated Governor-elect Katie Hobbs on her victory in a hard-fought race and offered my full cooperation as she prepares to assume the leadership of the State of Arizona,” Ducey said in a statement.

Ducey said his administration will make the transfer of power as “smooth and seamless as possible” to ensure the next governor “can hit the ground running.”

“All of us have waited patiently for the democratic process to play out. The people of Arizona have spoken, their votes have been counted and we respect their decision,” he added.

“No matter who we voted for, all of us have a stake in Arizona’s success. Our future is bright and boundless. Let us never forget that as we begin this next chapter in our state’s history.”

Today I congratulated Governor-elect Katie Hobbs on her victory in a hard-fought race and offered my full cooperation as she prepares to assume the leadership of the State of Arizona. pic.twitter.com/gkn9bbDlTF

Lake, who filed a lawsuit against Maricopa County officials on Wednesday, suggested that Ducey and Hobbs think twice before certifying the Democrat as the next governor of Arizona.

Her remarks come after the state’s attorney general wrote to officials from Maricopa County demanding answers about the problems revealed in the memo.

Two rural Arizona counties, Mohave and Cochise, have also delayed certifying their elections until the last possible day on Nov. 28 in protest of the problems reported in Maricopa County, the state’s most populous electorate, on Election Day.

Abe Hamadeh, the Republican candidate for Arizona’s attorney general position, has also sued his opponent and a number of election officials in Maricopa County over alleged voter disenfranchisement caused by widespread “errors and inaccuracies.”

Former President Donald Trump, a presidential candidate for the 2024 U.S. elections, called for Maricopa to redo its elections.

“This Election was a disgrace,” Trump wrote in a post on Truth Social on Nov. 22. “They should at minimum redo the Arizona Election,” Trump added, pointing to the memo.

Lake said her lawsuit was a bid to get the court to put pressure on Maricopa County to hand over public records her campaign has been asking for.

She accused local election officials of maladministration and went further to suggest they ran the election with “malicious intent” against Republican voters, who she said mostly vote in person on Election Day.

“We cannot allow an election like this to stand,” Lake told Newsmax, adding that she’s building a case with whistleblowers and insiders to support her claims.

“Sixty-two percent of the equipment in the polling places was inoperational or not fully functioning, and people were waiting in lines that were three hours or longer,” she added.

“They knew that on Election Day, that’s when our voters were showing up, and they intentionally, in my belief, threw a wrench into the machinery to make sure that that would be a day of disaster when it comes to elections.”

Among the problems were long lines on Election Day, which the memo said negatively affected GOP candidates, amounting to voter suppression.

The memo also disputed claims by county officials that printer/tabulator problems were resolved as of 3 p.m. local time and that their impact on voters was “insignificant.”

Lake, in response to Trump’s statement, characterized the issues identified in the memo as the “mass disenfranchisement” of Arizona voters.

Hobbs declared victory on Nov. 15, but Lake hasn’t conceded yet.