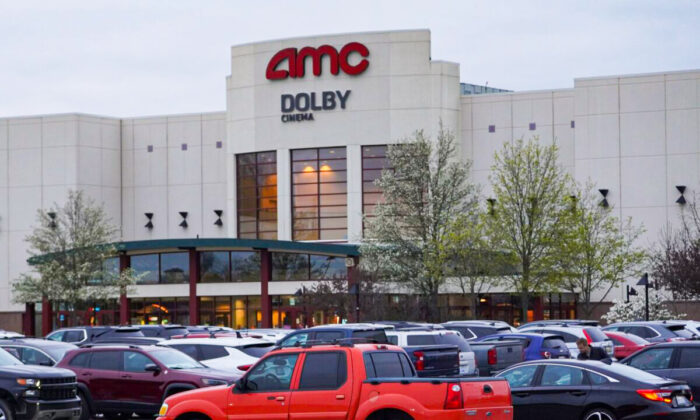 A view of one of six Michigan theaters that hosted the premier of D'Souza's 2000 Mules. Sterling Heights, Mich. May 2, 2022. (Steven Kovac/Epoch Times)
Politics

A capacity crowd of about 200 people filled a theater in Macomb County, Michigan, to view D’Souza’s documentary motion picture “2000 Mules.”

The film can be viewed online starting on May 7.

The documentary used cellphone signal tracking, digital geo-fencing, and video surveillance tapes of absentee ballot drop boxes to show that paid intermediaries called “mules” unlawfully gathered and delivered hundreds of thousands of absentee ballots in Democrat strongholds across much of the nation in the 2020 election.

On his way into the Macomb County showing, a retired IT manager, who asked not to be identified, told The Epoch Times that he had heard much about alleged fraud in the 2020 election, but had seen very little evidence.

“I’m open-minded going in,” he said. “I have not yet seen enough proof.”

On his way out of the movie the same man told The Epoch Times: “I am 95 percent convinced. I think law enforcement needs to go after these mules and prove a case against them in court.

“Will this ever happen? I’m not sure because too many people don’t want this to come out. Too many people have too much to lose if it does.”

Jacob Ries, 13, came to see the movie with his parents and grandparents.

“This movie is the compass that will steer and influence the younger generation. It influenced me in the right direction,” he told The Epoch Times after watching the film.

“I know the truth now. It’s the truth the government is trying to hide.”

Jacob’s father, Scott, said he found the film to be “eye-opening” and feared that “our American constitutional republic may collapse from the inside.”

“I would never have thought we would ever live in a country that would do something like this,” Scott said.

Jacob’s grandmother, Sue Vandeberghe said: “This is not about Democrats and Republicans anymore. It’s about right and wrong. It’s about saving our country.

“Yes, saving our country for all people, even those with closed minds and that disagree with us.”

Looking at the present condition of the country, he said, “I can’t understand why the union is always promoting Democrats.”

Jason Mueller, a UAW member from Wales Township, said, “I’m here tonight to see how and what they were able to steal in the 2020 election.”

UAW member Anthony Stella of Macomb Township said, “We’ve known for a long time that the 2020 election was stolen. I’m here tonight because I want to see exactly how they did it.”

Phillip Sinta, a UAW member from Ferndale and a strong Trump backer since 2016, said of D’Souza, “He’s a straight shooter. I trust him to tell the truth. I have seen all of his previous movies.”

Kim Turcott told The Epoch Times, “I’m glad they showed the geo-tracking. We know more now, having seen the movie. I thank God for the people that continue to do these investigations every day.

“Drop boxes are bad and have to go. We’ve got to keep a closer eye on our relatives in nursing homes around election time.”

Jill Rebar admired the use of technology in providing the details of the investigation and wondered what she could do to help.

“I found the movie awesome, interesting, and sad,” Rebar said.

Colleen Kendro said, “Everybody should see this movie no matter who you voted for.”

Paula Badalamente said, “People who don’t know about this stuff need to know.”

A handful of volunteers were in front of the theater circulating a petition demanding the decertification of the 2020 election in Michigan, where the illegal activities of 500 mules were uncovered in Wayne County.

Among them was Vietnam veteran Dan Landon of Saline.

Landon, a retired 34-year veteran special education teacher and a member of Michigan’s largest teachers union, said he wasn’t there to see the movie, but to work for change.

“In the 2020 election, I received three applications for absentee ballots mailed to my house with the names of three different people on them—all supposedly living at my address,” he said. “As a Republican poll watcher, I was kicked out on election night, and it took a lawyer to get me readmitted.

“We’ve got to save our country and bring it back the way God intended it to be.”

“2000 Mules” also debuted at a Times Square multiplex theater in Manhattan, where the audience erupted into applause as the final credits rolled.

Minarik sees the documentary as “another avenue” to approach the issue of the integrity of the 2020 election.

Before seeing the movie, she said she had misgivings about the election, caused by evidence of misconduct that she had seen previously.

Minarik said she came to the movie expecting it to make a strong case.

“I was hoping for some proof,” she said.

According to Minarik, the film delivered it.

Asher Schwartz, who declined to share anything about himself other than his name, called the movie “thought-provoking.”

Schwartz said that before he had seen the film, he had leaned toward the conclusion that the election result was illicitly affected.

Schwartz said the evidence presented was convincing, but he still reserved his final judgment on it, noting that it would need to be picked up by law enforcement.

Kelly M. said she was impressed by the movie, although she wished more of the evidence would have been directly shown on screen in order to fortify it against criticism.

One woman, who asked not to be identified for fear of losing business, hoped more people would see the movie.

She said she was convinced the election results were illegitimate even before seeing the film.

“It was ripe for fraud,” she said, because of the unprecedented widespread use of absentee ballot drop boxes.

Unable to reconcile how Trump could perform significantly better in 2020 than in 2016 and still lose, she said it “just didn’t make sense.”

Peter Svab contributed to this story.