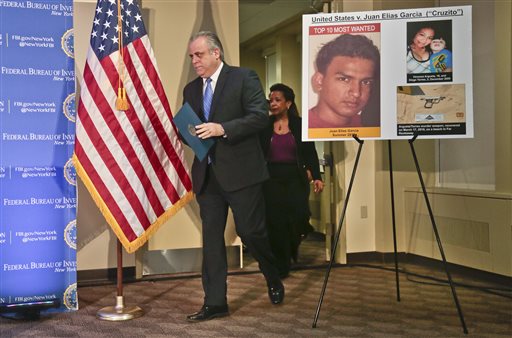 George Venizelos, left, the FBI assistant director of the New York field office, and Loretta Lynch, center, U.S. Attorney for the Eastern District of New York, walks past a display showing Juan Elias Garcia, left, and his alleged murder victims Vanessa Argueta and her son Diego Torres, right, at a press conference, Wednesday March 26, 2014 in New York. The FBI announced that Garcia, 21, has been added to the their "Ten Most Wanted Fugitives" list for his alleged role in the 2010 slayings of his 19-year-old girlfriend and her 2-year-old son on Long Island in New York. The FBI said that the Salvadoran is the last of four MS-13 gang members being sought in the killings. (AP Photo/Bebeto Matthews)
US

The violent gang MS-13 (Mara Salvatrucha) has reportedly been recruiting members at an Arizona facility that houses new arrivals from Central America.

Homeland Security sources told the Daily Mail, which was prominently featured on the Drudge Report on Monday morning, that MS-13 and other street gangs have infiltrated the facilities where illegal immigrant minors are staying.

About 57,000 minors from Central America have tried to enter the US via the US-Mexico border over the past couple of months. Gang members and are apparently among the minors as well, the Mail said.

But in particular, MS-13 and the 18th Street gang are using members who are from Central America to cross the border to recruit minors into their organizations. It’s estimated that MS-13 has tens of thousand of members.

Shawn Moran, with the National Border Patrol Council, told Fox News that agents have witnessed gang recruiting efforts at a Border Patrol facility in Nogales, Ariz., using the Red Cross as a phone bank to “recruit, enlist, and pressure” minors to cross the border.

“It makes sense that MS-13 would do the same,” said Moran.

He said agents don’t have the power to isolate admitted criminals, gang members, or people engaging in criminal behavior because they’re minors.

“We know it’s happening because agents are telling us,” Moran told the broadcaster. “The Border Patrol is trying to downplay it.”

MS-13 is a transnational gang that started in the 1980s. It was initially started in Los Angeles by Salvadoran immigrants and flourished when members went back to their home countries.

According to the LA Post-Examiner, MS-13 is being used by the Sinaloa cartel in Mexico to wage war against rival cartel Los Zetas.

A few weeks ago, 12 “top-ranking” members of MS-13 were charged in New Jersey. U.S. Attorney Paul Fishman said they were charged with racketeering, drug trafficking, and related crimes, according to The Associated Press. One of those charged with the crimes is a California man who claims to control the gang’s US operations.

Fishman said that Jose Juan Rodriguez-Juarez, 34, was the alleged US leader of MS-13’s “national program,” according to AP.