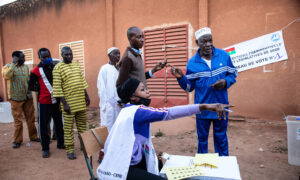 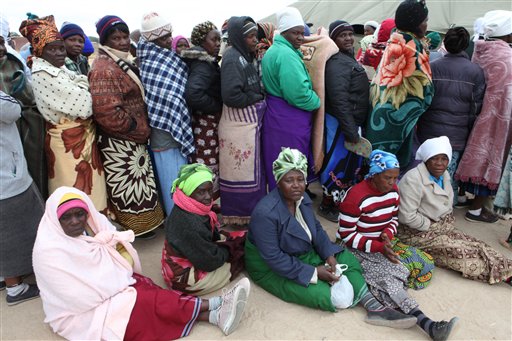 MASVINGO, Zimbabwe—Thin like their owners, cattle wander in a parched riverbed. Desperate villagers barter a few fish for maize because there is no money for food. In this drought-stricken area of Zimbabwe, some people allege that who you know determines whether you’ll get state food aid, with those out of favor with local officials going hungry.

Underscoring the severity of the drought linked to the El Nino weather pattern that is hitting much of southern Africa, Zimbabwean President Robert Mugabe declared a state of disaster, with the hope that Thursday’s announcement will speed up the flow of aid to needy communities.

The drought has devastated crops and sharply reduced rainfall. The situation is especially acute in Zimbabwe, where a declining economy and rising unemployment have made life hard for many people in a country once known as a regional breadbasket.

The number of Zimbabweans in need of urgent food aid has spiked to about one quarter of the population of 13 million people, according to the U.N. World Food Program. That number could go even higher and the food crisis could spill into next year, said Prisca Mupfumira, Zimbabwe’s minister for public service, labor and social welfare.

Families are going up to two weeks without a solid meal in Madan’ombe, a village in Masvingo province in southern Zimbabwe.

Loveness Ndlovu and her six children prepare smoked fish on a fireplace in a round hut devoid of any other food. The children, who last tasted meat a month ago, know better than to salivate over the six catfish caught in a lake by their father, Zimaniwa.

“They can only touch the fish, they cannot eat,” Ndlovu said. “It’s two weeks now since I last had a proper meal. If it gets worse, I will have to beg from other villagers so I can at least feed my kids.”

The parents plan to barter the fish for other foodstuffs such as maize. Ordinarily, the entire family would be busy in the fields, weeding a knee-high maize crop. Now they can only watch as skinny donkeys graze on failed crops. Vast fields lie dry and fallow.

A nearby shopping center is packed with food items such as rice, the staple maize meal and cooking oil, mostly imported from neighboring South Africa. But with mines and other industries closing because of economic problems, people can’t afford to buy them.

Some villagers, however, trade maize for fish.

“There is not much circulation of cash here so we have to rely on barter trade,” Zimaniwa said.

Most Zimbabweans rely on agriculture for a living, and Mupfumira, the Cabinet minister, said the government plans to import 700,000 tons of maize to distribute to the needy.

Some Zimbabweans believe they won’t get a share because they don’t know the right people. Mugabe has been in power for decades, his government holding a tight grip amid periodic accusations of human rights abuses and voter fraud.

“Only those close to the (district) councilor get to eat,” said Sydney Makabe, a resident in Masvingo province, whose capital has the same name.

“Rations that are coming now are supposed to be given to the elderly. But many times, we see young people who don’t qualify getting the food,” said Makabe, adding that he is not involved in politics.

The Zimbabwe Peace Project, a non-governmental group, said reports indicate food is being used as a political weapon to punish the opposition in some cases. It cited 135 cases of “food violations” from September to December.

In Gwanda, a town southwest of Harare, the residents’ association is encouraging people to buy ruling ZANU-PF party membership cards and attend party meetings to enhance chances of getting government-funded food aid.

Zimbabwe: US Dentist Not Wanted for Killing Lion

Mupfumira promised to act against any distribution problems.

“As government, we are responsible for the welfare of all citizens. Anyone politicizing food aid will be punished severely, but we have not received any such reports yet,” Mupfumira said.

Most people, however, are likely to be assisted by donors rather than the cash-strapped government. Despite icy relations with the West, Zimbabwe has averted food crises for the past decade due largely to Western assistance. The United States and the European Union said last month that they are increasing humanitarian funding.

The World Food Program has said it has mechanisms to “mitigate against the politicization of food assistance in Zimbabwe as elsewhere in the world” and that it works closely with Zimbabwe to ensure food and cash assistance “reaches only those vulnerable people for whom it is intended.”

Jonathan Manyowa, a an 87-year-old resident of Gondo village in Chivi district, spends his days in a tree’s shade, warding off any animals that stray into the field where he has struggled to grow a maize crop.

“The last time I witnessed such a catastrophe was when I was a very young boy, and it was not even this disastrous,” Manyowa said.