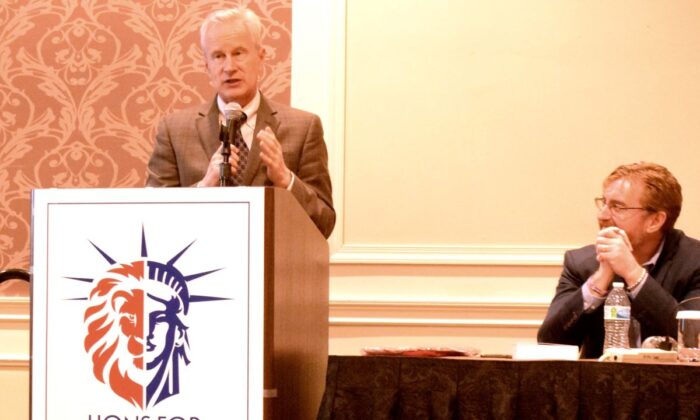 'This is getting into human chromosomes'
By Beth Brelje

How safe are COVID-19 vaccines? Should everyone be taking them? Are people who get vaccines more likely to get COVID-19? Can genetic material in the vaccines be incorporated into the human genome? These are some of the unknown questions that researchers around the world are currently investigating.

With more initial findings and hypotheses now released to the public, a group of free speech and information advocates last week during a presentation in Pennsylvania gave their “uncensored” take of the current science. They are currently traveling around the United States sharing concerns about how public health policy and debate throughout the COVID-19 pandemic has been handled.

The speakers were Dr. Peter McCullough, a renowned cardiologist whose own research is highly-cited; Dr. Bryan Ardis, a chiropractor; attorney Thomas Renz; and Steve Kirsch, a Silicon Valley philanthropist who supported early efforts searching for COVID-19 treatments in medicines already on the market. They were invited by the “Lions for Liberty,” a group of Penn State University students, faculty, and staff that sprang up in response to the university’s pandemic mitigation policies that require employees to get vaccinated for COVID-19.

The four spoke on numerous occasions; at Toftrees Resort in State College on March 3 and at Hershey Lodge on March 4 before which they testified at the Capitol Building in Harrisburg in a hearing hosted by state Sen. Doug Mastriano, who is a Republican running for governor.

They presented data from peer-reviewed studies, the Centers for Disease Control and Prevention (CDC), and government documents, and expressed their concerns that the COVID-19 vaccines recommended for all Americans were problematic from the start.

“It was clear vaccines weren’t sufficiently tested and important groups were excluded, like pregnant women,” McCullough said in Hershey. “With no data on safety and efficacy, pregnant women were encouraged, then later forced, to take the vaccines.”

He called the results of a newly released study disturbing. The study, titled  “Immune imprinting, breadth of variant recognition, and germinal center response in human SARS-CoV-2 infection and vaccination,” shows that messenger ribonucleic acid (mRNA) from the vaccine stays in the body much longer than expected. Messenger RNA is a single-stranded molecule that carries genetic code, usually from the DNA in a cell’s nucleus, to ribosomes, the cell’s protein-making area.

“It shows the messenger RNA is in the lymph nodes months after the vaccine had been received. This is proven,” McCullough said. “The vaccines are not leaving the body. It’s found in the lymph nodes at 60 days. The thought in the FDA briefing book was that these vaccines were going to be in the body for a day or two, generate immunity, and then be out.”

He cited another paper published in February by a team of researchers led by Associate Prof. Yang De Marinis at the Department of Clinical Sciences of Lund University, Sweden, that shows “reverse transcription” is happening—that is, an enzyme makes a copy of DNA from RNA.

“This is getting into human chromosomes, at least this segment is. If it turns out that the entire code goes into human chromosomes, and if it expresses spike protein within cells—spike protein is an abnormal protein, it is not a human protein— if this protein is expressed within human cells on a regular basis or on demand, and it’s passed from parent cells to daughter cells, and it’s passed to the developing embryo, we’re in trouble.”

Now, the race is on to confirm this finding with additional studies, McCullough said.

“On the CDC website, it says the vaccines don’t change the human genome. This paper that just broke in the last week is strongly suggesting the CDC was gravely wrong,” McCullough said. “We should have had monthly safety reports to America. If we’re going to ask Americans to take an experimental vaccine or investigational vaccine, there should have been a safety report.”

Coming out of the clinical trials, what was reported in the briefing booklet looked OK, McCullough said. Through October, over 220 million people took a vaccine.

Now, a new study in The Lancet is pointing to potential multi-inflammatory syndrome in COVID-19 vaccinated children, McCullough said. “Some kids are on ventilators. These were perfectly healthy kids and now they’re on the ventilator fighting for their life.”

During the hearing in Harrisburg, a number of COVID-related bills were mentioned.

Mastriano is the prime sponsor of Senate Bill 471, dubbed the Medical Freedom Act, which proposed that the state government shall not impose a vaccination requirement on adults or children without consent. It also proposed to make it illegal for the government to mandate employers to require vaccination of their staff and ensures unemployment compensation for unvaccinated workers. The bill moved out of the Health and Human Services Committee in November, committee chair state Sen. Michele Brooks said at the hearing. She also advocated for her own legislation, Senate Bill 937, which prohibits the state from requiring COVID-19 vaccines for students in kindergarten through grade 12. It is now in the House Education Committee, Brooks said.

A companion bill, SB 1091/HB 1741 would increase access to off-label FDA approved medications in the early stages of COVID-19. This would allow physicians and pharmacists to prescribe and dispense drugs already approved by the FDA for off-label treatment of COVID-19, without penalty from licensing boards. And it would clarify that a pharmacy may not decline to fill a prescription of a COVID-19 early treatment drug based solely on their opinion of the drug. Mastriano is the prime sponsor of this Senate bill and Rep. Dawn Keefer sponsors the House version.

Ardis made a plea to lawmakers at the hearing, on behalf of doctors.

“Please let them practice medicine. Never in the history of the world has there been one protocol for every human. We are all genetically different,” Ardis said. “Please allow doctors, once again, to be protected to practice medicine. They are the only ones that have known the history of their patients. You cannot tell me there’s one solution or protocol for every American who gets a respiratory infection right now; it’s impossible. And then you’re going to take their license from them, destroy their livelihood and then slander them with their reputation, because they’re holding to their oath to do no harm? Please. Put legislation in place that they can never be punished for doing their best to do no harm, to treat their patients.”

Lions for Liberty invited two university policy makers, Penn State President Eric Barron and Provost Nick Jones, to attend the forum. But Barron and Jones were not among the combined 700 attendees.

“It is disconcerting, to say the least, that leadership from the university’s administration were unwilling to attend or engage in either of these events,” Arielle Girouard, Lions for Liberty press secretary told The Epoch Times. “It is unfortunate that one of the nation’s top universities in research, education, and innovation has repeatedly denied our attempts to have a discussion on the science that has driven public health and institutional, including university, policies over the past two years. President Barron acknowledges a growing lack of public trust in higher education. It is hard to see how refusal to engage with credentialed academics and professionals, from both within and outside of the Penn State community, does anything but sow further distrust in the public. Regardless, Lions for Liberty isn’t going anywhere. We are committed to fostering a community, open to all who seek truth, so we may make well-informed decisions regarding our health, among other individual liberties.”

Penn State did not respond to a request from The Epoch Times to explain why they did not attend.

The Association of American Physicians and Surgeons and the Penn State chapter of Turning Point USA co-hosted the speakers with Lions for Liberty.