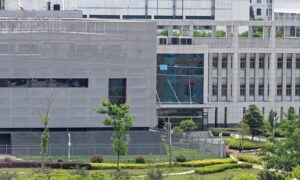 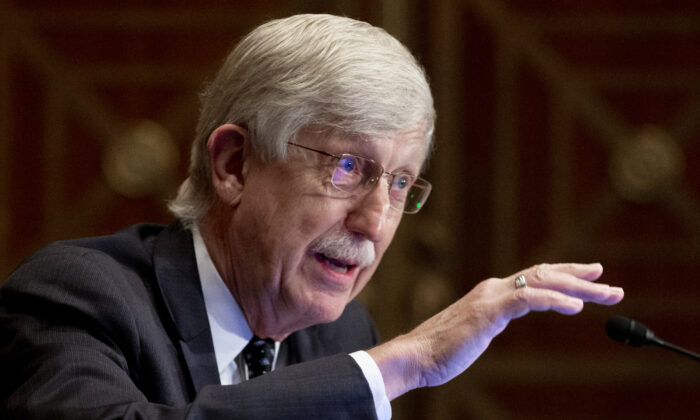 Dr. Francis Collins, director of the National Institutes of Health, appears before a Senate hearing to discuss vaccines, in Washington, on Sept. 9, 2020. (Michael Reynolds/Pool/Getty Images)
Politics

Dr. Francis Collins Stepping Down as Head of NIH

The head of the U.S. National Institutes of Health (NIH) is stepping down amid lingering questions regarding his agency’s funding of research in China.

Dr. Francis Collins has served as NIH director for over 12 years in a tenure that has spanned three administrations.

“It has been an incredible privilege to lead this great agency for more than a decade,” Collins said in a statement on Tuesday. “I love this agency and its people so deeply that the decision to step down was a difficult one, done in close counsel with my wife, Diane Baker, and my family.”

Collins was appointed by then-President Barack Obama on Aug. 17, 2009. Presidents Donald Trump and Joe Biden asked him to remain in the position.

Before that, he directed the National Human Genome Research Institute. After stepping down from NIH, he plans to work at the research institute.

NIH includes a number of offices, including the National Institute of Allergy and Infectious Diseases. Dr. Anthony Fauci, the head of that office, has become one of the most prominent public health voices during the COVID-19 pandemic, and Collins has backed Fauci on a number of occasions. But both officials have come under scrutiny for statements regarding the origins of the CCP (Chinese Communist Party) virus and funding given to Chinese researchers. The officials deny the funding was for a type of research called gain of function, but some scientists, including Dr. Richard Ebright, have said documents made public this year undermine those claims.

Collins and Fauci were “untruthful” when they claimed before Congress that the NIH did not support gain of function research or potential pandemic pathogen enhancement at the Wuhan lab, Ebright said last month. Fauci and Collins “have broken trust with the American people,” three Republicans said around the same time.

Sen. Rand Paul (R-Ky.) has referred Fauci, but not Collins, to the Department of Justice for a criminal investigation. The department has not answered questions on the matter and the White House has continued to stand by Fauci and others.

“Dr. Collins has had a great career as a scientist and public servant, and I hope being caught between our investigation and an administration that does not want to answer questions did not hasten his departure. NIH, like the rest of the executive branch, has not been forthcoming in our investigation, and more transparency in this matter should be demanded of its next director,” Rep. Morgan Griffith (R-Va.) told The Epoch Times in an email.

Collins’ announcement made no mention of the controversy.

“I am proud of all we’ve accomplished. I fundamentally believe, however, that no single person should serve in the position too long, and that it’s time to bring in a new scientist to lead the NIH into the future,” he said. “I’m most grateful and proud of the NIH staff and the scientific community, whose extraordinary commitment to lifesaving research delivers hope to the American people and the world every day.”

Biden praised Collins, calling him “one of the most important scientists of our time.”

Collins “has made immense contributions to biomedicine,” added Eric Topol, founder and director of the Scripps Research Translational Institute. “I am saddened to see him stepping down, want to express the deepest appreciation for decades of leadership.”