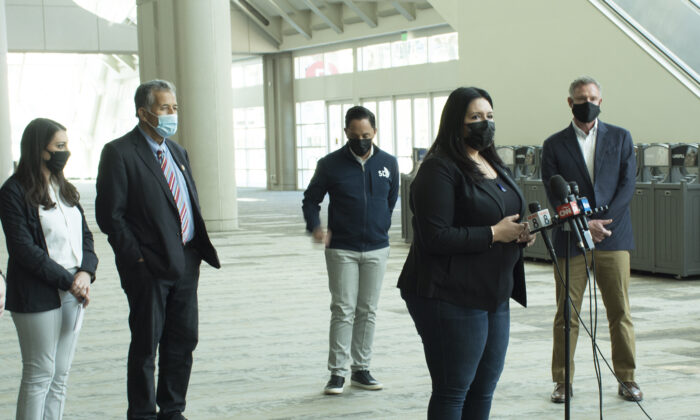 Dozens of the more than 700 unaccompanied minors who crossed the U.S.–Mexico border illegally and were transported to a shelter at the San Diego Convention Center have tested positive for COVID-19, according to local and health officials cited in multiple media reports.

The Department of Health and Human Services (HHS) told The Epoch Times on March 30 that 70 minors have tested positive. None have required hospitalization.

The girls who tested positive were removed from the other girls and kept in separate areas on a separate floor.

All minors are being tested before boarding transportation to the center.

The center currently has 723 children, and the maximum capacity is 1,450, an HHS spokesperson told The Epoch Times via email.

San Diego Mayor Todd Gloria told the media over the weekend that the San Diego shelter is only taking unaccompanied girls aged 13 to 17, who are being transferred from Texas shelters. The first 500 unaccompanied minors who entered the United States as part of a surge of illegal immigrants at the southern border arrived at the facility on March 27.

The children will spend an average of 30–35 days in the shelter, which is under contract until mid-July.

The San Diego shelter will operate as a processing facility where the children will stay until social workers can connect them with relatives or sponsors in the United States.

The center is one of at least eight facilities that have been converted into shelters or created to house the influx of immigrant children entering the United States in recent months.

On March 27, Gloria and County Board of Supervisors Vice Chairwoman Nora Vargas led elected officials for a tour of the exhibit hall where some cots had already been placed. The guided tour wasn’t open to the press. A local station, CBS8 TV, was selected to provide a press pool video.

“Today we are showing the world that San Diego is a welcoming city. … These are children. This is the right thing to do,” Gloria said.

He said the shelter will not only provide beds and food, but also a full range of services.

“I want to be clear, this is not just cots, but [what] we are doing here is intensive case management, medical care, behavioral health care, educational services, recreational services, nutritious meals, legal services, religious services, and probably above anything, to be a safe place,” the mayor said.

A small group of demonstrators from the group Patriot Fire staged a protest outside the convention center on March 27.

The group says that they believe “the fraud asylum system is supported by human trafficking by murderous smuggling cartels,” and San Diego’s participation in the broken system adds to the problem.

The recent spike in illegal immigration has become a flashpoint of criticism for the Biden administration, with Republicans blaming the rollback of Trump-era policies and the overall tenor of messaging around immigration, widely seen as more welcoming of would-be asylum seekers.

President Joe Biden said that his administration is continuing to quickly expel most adults and families under a public health order imposed at the start of the COVID-19 outbreak. The difference is that the government is allowing teens and children, at least temporarily, to stay in the country.

U.S. Immigration and Customs Enforcement (ICE) Acting Director Tae D. Johnson said recently: “Our border is not open. The majority of individuals continue to be expelled under the Centers for Disease Control’s public health authority.”

The message that the U.S.–Mexico border “is not open” is part of the Biden administration’s more aggressive posture after a wave of criticism that Biden’s rhetoric on immigration reform was being interpreted by would-be illegal immigrants as an invitation to enter the country.

“The Biden-Harris administration is committed to implementing an immigration system that is humane, orderly, and lawful,” an official from the HHS’s Administration for Children and Families said in an emailed statement to The Epoch Times, adding that the administration “is monitoring the border and marshaling all corners of the government to find compassionate and fair solutions.”