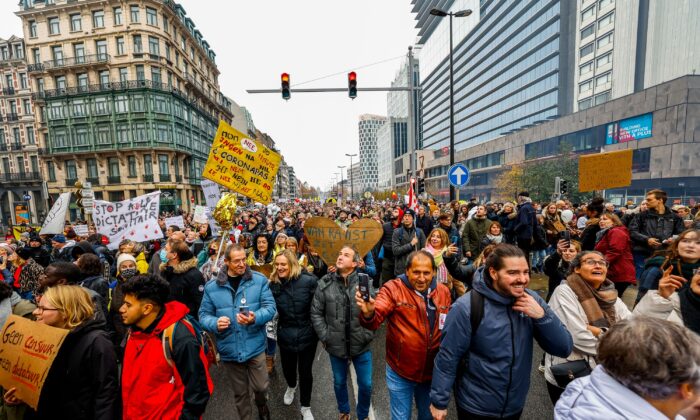 People take part in a demonstration against COVID-19 measures, including the country's health pass, in Brussels, Belgium, on Nov. 21, 2021. (Hadrien Dure/Belga Mag/AFP via Getty Images)
WORLD

A large demonstration over government-imposed COVID-19 restrictions and vaccination measures on Nov. 21 in Brussels, Belgium, led to about 40 arrests and several injuries as police fired water cannons and used tear gas at people throwing rocks and smoke bombs.

Police said about 35,000 people took to the streets, which started peacefully around 1 p.m. local time before some violence broke out several hours later, including the destruction of property and wounding of three police officers, local news agency VRT reported.

The officers and at least one protester had been transported to hospitals for treatment of minor injuries. Police said late on Nov. 21 they detained 44 demonstrators, although a spokesperson for the Brussels police told VRT that the number of arrests could increase as investigators look into videos.

Facing up to the police lines, protesters held hands and chanted “freedom.” One protester was carrying a placard reading “when tyranny becomes law, rebellion becomes duty.”

Philippe Close, the mayor of Brussels, wrote on Twitter he condemns the violence that erupted during the demonstration and has instructed police to make arrests.

“The demonstration against COVID measures counted 35,000 protesters,” Close said. “I strongly condemn the troublemakers and I have ordered arrests and video analysis.”

Meanwhile, in the neighboring Netherlands, protests for the third night in a row turned violent in cities across the country as police clashed with angry youth who set fires and threw rocks to protest government-imposed COVID-19 restrictions.

Dutch demonstrators say they find some of the measures unscientific and unvaccinated citizens are being demonized by the government. The Netherlands reimposed a partial lockdown on Nov. 13 for an initial three weeks and is also considering so-called “2G measures,” allowing bars and cafes to ban people who have not been vaccinated against the CCP (Chinese Communist Party) virus.

Authorities have claimed that such moves would slow the spread of the CCP virus, although studies have suggested that numerous lockdown efforts around the world have proven to be fruitless in slowing the spread of the COVID-19 or reducing deaths.

Responding to the worst disturbances since a full lockdown led to widespread disorder and more than 500 arrests in January, police said five officers had been injured overnight on Nov. 20 and at least 64 people detained in three provinces, including dozens who threw fireworks and fences during a soccer match at Feyenoord Rotterdam’s stadium.

Four people, believed to have been hit by police bullets, remain in a hospital on Nov. 21, according to a statement by Dutch authorities.

Over the same weekend, thousands of others also turned out for rallies in Switzerland and Italy. The Swiss people protested a forthcoming referendum on whether to approve the government’s COVID-19 restrictions law, while Italians again demonstrated against the government’s “green pass” vaccine passport system.