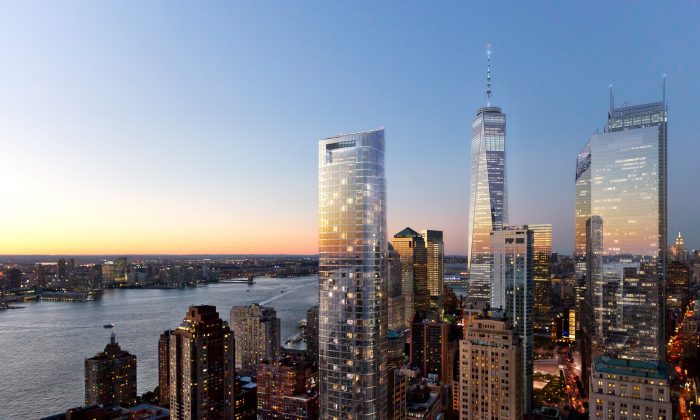 The 64-story curved-glass 50 West tower has officially opened sales to the public, after a quiet phase during which 30 percent of the 191 units were sold in 30 days.

Downtown is rising, according to many brokers and developers invested in the area, though prices are still more affordable compared to Midtown whether it’s retail or residential.

The units start at $1.6 million for a 1-bedroom, to more than $7.2 million for 5-bedroom duplex penthouses in the tower’s L Series residences. Ceiling heights start at 10 feet going up to 22 feet in double-height living rooms of the duplex units.

The building contains four full floors of amenities, including a landscaped roof lounge at 730 feet high and a Water Club in the cellar with a 60-foot lap pool, hot tub, and steam room. Two floors are aptly placed above ground floor retail but not so high it’d take away from floors for apartments with great views. The fourth and fifth floors contain additional entertainment including a library, demonstration kitchen, and an extensive fitness floor.

Architect Helmut Jahn designed the building with interiors done by Thomas Juul-Hansen, who purchased a home in the building himself.

A number of foreign investors have purchased units during the quiet phase, including a 7-bedroom, $18.63 million penthouse. But the building was built with families in mind, said Time Equities founder and CEO Francis Greenburger, and the majority of the residences are 2–3 bedroom units.

Over 30 years ago, Greenburger bought an office-loft building downtown, on the edge of Battery Park City around the time the first residential tower had gone up. Brookfield Place (World Financial Center) had just started construction a year ago.

“I’ve owned it forever,” Greenburger said. “We didn’t think of demolishing it when we first bought the [property].” It wasn’t until 2005 that he decided to renovate the building, and realized the lot allowed him to build much higher, garnering wrap-around views of the Hudson River.

“We discovered it would have fantastic views for most of the apartment building,” Greenburger said.

But like many developments in the city that started around 2008, the project stalled soon after demolition. Last year Time Equities secured financing, and the building is expected to be complete in 2016.

The expectation was that the planned community of Battery Park City would be filled with young professionals, 30-somethings who worked in the Financial District and wanted to live close by, Greenburger said. That concept of branding downtown Manhattan still exists today.

But when the planned neighborhood of Battery Park City started filling out, it was clear the main residents were families, Greenburger said. “There were an enormous amount of strollers on the street.”

Thus, there is a variety of child-friendly floors at 50 West designed with input from the Little Red School House. The building includes a child-friendly game room, arts and crafts room, playroom, and children’s sports studios.

Even a good number of the early buyers were families, including some from Battery Park City. Granted, Battery Park City condos were built on land leased by the government, which means if the rent rises, so do residents’ expenses, Greenburger said, and that had fueled some residents’ moves as well.

A 6,000-square-foot plaza will connect West and Washington Streets to the West Thames Pedestrian Bridge leading to Battery Park City.

It’s a lifestyle that combines the serene escapism Battery Park provides with the dynamism of downtown as a soon-to-be 24/7 neighborhood, according to Greenburger.

The official marketing campaign won’t launch until the fall, but the 6,000-square-foot sales room at 40 Rector St., has already drawn a lot of interest.

It includes to-scale mock-ups so residents can touch and feel some of the custom appliances and finishes; the receptionist area mirrors the building’s planned lobby; a window of the same glass has been installed; and views of every floor are available.

“These days you really build a building twice,” Greenburger said. “You build it digitally then you build it again in real life.”

Drones were used at the 50 West building to take photos of potential views before the Federal Aviation Administration sent a warning. Views are shown onto a curved projection wall, allowing visitors to see not just the floor plans and renderings, but the exact view every single apartment unit would allow.