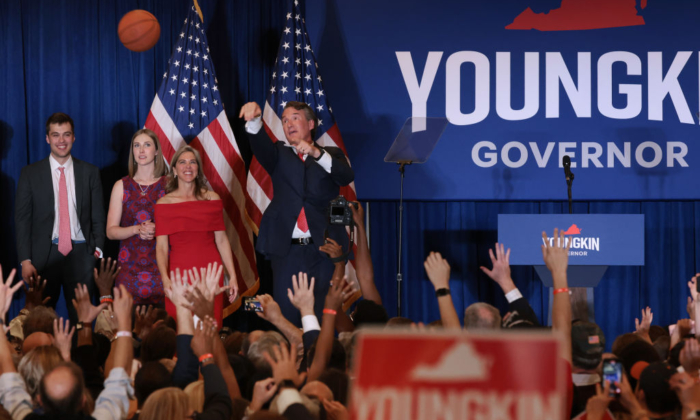 Virginia Republican gubernatorial candidate Glenn Youngkin shoots an autographed basketball into the crowd with his family at an election-night rally at the Westfields Marriott Washington Dulles in Chantilly, Va., on Nov. 2, 2021. (Chip Somodevilla/Getty Images)
2022 Midterm Elections

Republican State Leadership Committee (RSLC) President Dee Duncan said that this week’s down-ballot seat flips in statehouse elections in Virginia and New Jersey revealed a part of the bigger picture the party plans to unveil in 2022, when 36 states hold elections.

“A lot of thought and data went into this and we won round one of the fight for the ’22 cycle,” Duncan said, according to Fox News, referring to the Republican Glenn Youngkin’s recent victory over former Democratic Gov. Terry McAuliffe in Virginia.

Alongside Youngkin, the GOP scored wins for the seats of lieutenant governor and attorney general. Virginia has not had a Republican governor since 2009. Altogether, the GOP flipped seven seats in Virginia’s House of Delegates, and now holds a majority advantage at 52–48.

Republican Winsome Sears defeated Democrat Hala Ayala to become the first black woman ever to be elected statewide in Virginia, and also the first woman to serve as lieutenant governor of the state. Sears has succeeded Democrat Justin Fairfax, who unsuccessfully ran for the governorship.

The son of a Cuban immigrant, Jason Miyares, was the Republican nominee who defeated Mark Herring, the Democratic incumbent, for the attorney general position. Herring was running for a third term.

“Candidates matter and we’ve been ramping up our efforts the last couple of cycles to help recruit diverse candidates across the country,” Duncan told news outlets Thursday.

“We believe that we practice what we preach. Fifty-seven percent of the candidates that we ran in flips in Virginia were either female or minority candidates and that is something that we’re incredibly proud of,” he added.

In New Jersey, Republicans managed to flip six state assembly seats and two state senate seats. This has narrowed the Democrats’ advantage in both chambers. Democratic Gov. Phil Murphy, who was expected to win by a wide margin, managed only a narrow win over GOP nominee Jack Ciattarelli.

“The Senate president has spent 20 years in Trenton,” Durr said in his campaign video. “Higher taxes, increasing debt, and the rising cost of living; we deserve better. New Jersey, it’s time for a change.”

RSLC President Duncan acknowledged that Democrats were going to come back next year motivated and better funded, but he said, according to Fox, that “even if we’re outspent and outfunded, we can still win in ’22.”

Democratic Legislative Campaign Committee (DLCC) noted in response that, back in 2017, after President Donald Trump’s first year, the party had flipped 15 seats in the Virginia House of Delegates.

“All of our Democratic candidates ran strong campaigns focused on the issues and what they delivered for their constituents—and as a result, many were reelected in tough districts bucking the national political trend,” DLCC spokesperson Christina Polizzi told Fox News. “Their success shows us the path forward for 2022 and how Democrats can win in competitive environments. We knew from the beginning that this election would be a fight and down to the wire, just like next year’s will be.”

Based on data from the National Conference on State Legislatures, Republicans control 3,974 seats, or 54 percent, of the total 7,383 legislative seats; 61 out of 98 chambers; 30 of 49 legislatures; and carry total control in 23 states.