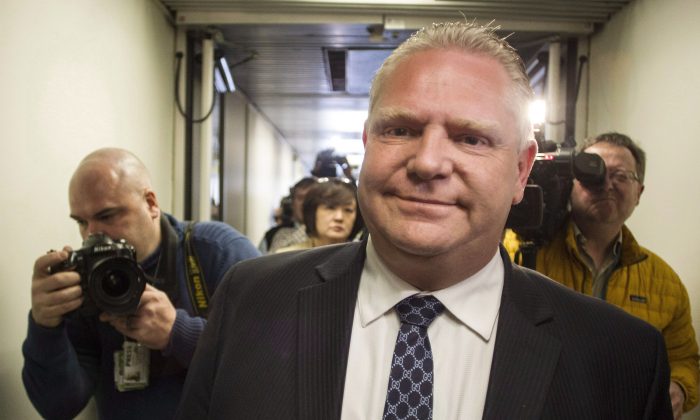 Coun. Doug Ford said he decided to take “the high road” two days after Chief Bill Blair filed a defamation notice which demanded a public apology and retraction in an agreed upon forum.

“I apologize to the chief and, he feels I’ve impugned his reputation, by no means am I doing that and I retract my statement, “Ford told reporters at city hall. “We’re going to move forward with the business of the city.”

But Blair’s spokesman said Ford’s retraction and apology was not being accepted because it did not meet terms that the councillor and the police chief had agreed to earlier in the day.

“Councillor Ford called Chief Blair this morning to apologize. Chief Blair said that the councillor would have to send him the text of his public retraction and apology and the chief would send it to his lawyer,” Mark Pugash told The Canadian Press. “The Councillor agreed to that, we’ve heard nothing since.”

Pugash added that Blair’s notice of defamation was still in effect.

“The terms of the notice of defamation have not been met,” he said.

But Ford suggested his apparently impromptu public gestures would suffice.

Ford had suggested two weeks ago that Blair helped leak information that police were preparing to subpoena the mayor in an ongoing investigation as “payback”—although he did not elaborate on what he meant.

At the time, Blair said Ford was lying and warned he was prepared to take legal action.

The police chief made good on that threat after it appeared Ford was standing by what he said. The legal
action was a personal pursuit and did not involve taxpayer money, Blair’s spokesman had said.

“I talked to him. I told him that I apologize,” he said.

“The chief and I have had a good relationship, I think, a very good relationship I told him, especially the first few years. It kind of went off the tracks last year, but again I reached out to him personally.”

The dispute stemmed from a Toronto Star report, published Aug.1, which cited sources saying police were preparing to subpoena the mayor to testify at a preliminary hearing for his friend Alexander (Sandro) Lisi, who is facing drug and extortion charges.

“When you tell the media there’s a subpoena and don’t tell anyone else? That alone says it all right there.

That says it all,” he had said at the time.” It’s disappointing that the police chief, in my opinion, would condone this behaviour from his own department.”

Both the councillor had his brother have publicly criticized Blair ever since a police investigation last year turned up a video, which appeared to show Rob Ford smoking crack cocaine.

At a news conference last October, Blair had said he was disappointed at what the video showed.

The mayor, who later admitted to smoking crack cocaine in a “drunken stupor,” has publicly accused Blair of wasting taxpayers’ money with the investigation and challenged the chief to arrest and charge him.