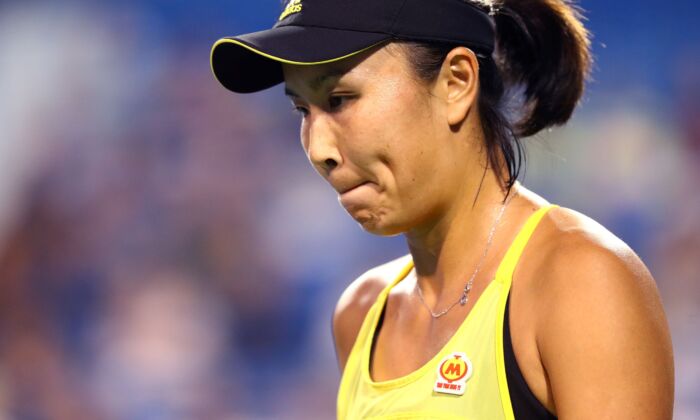 Shuai Peng of China looks on during her match against Agnieszka Radwanska of Poland on Day 7 of the Connecticut Open at Yale in New Haven, Conn., on Aug. 24, 2017. (Maddie Meyer/Getty Images)
China Human Rights

The Women’s Tennis Association (WTA) and a rights group have cast doubt on an email that Chinese state-run media are attributing to missing Chinese tennis star Peng Shuai.

The email, released on Nov. 17 by communist party-controlled media and not Peng herself, which begins “Hello everyone this is Peng Shuai,” has failed to quell concerns for Peng’s safety and whereabouts. The email, written in Peng’s voice, claims that she is not missing or unsafe.

The email comes after Peng made sexual assault allegations on her now-deleted Weibo account against a former high-ranking communist party official. In those comments, Peng told the accused, “I know you will deny it and you will get back at me.”

“The statement released today by Chinese state media concerning Peng Shuai only raises my concerns as to her safety and whereabouts,” WTA Chairman Steve Simon said in a Wednesday statement.

Peng, a 35-year-old Grand Slam doubles champion, alleged in her Twitter-like post earlier this month that former Chinese vice premier Zhang Gaoli, 75, coerced her into sex before she became his mistress. Her lengthy post was deleted within an hour and the player has since disappeared from public view.

The Chinese regime’s mouthpiece, China Global Television Network (CGTN), released on Twitter what it claims to be an email written by Peng to the WTA Chairman, recanting her sexual assault allegations against the 75-year-old retired official: “… the allegation of sexual assault, is not true.”

“I’ve just been resting at home and everything is fine,” the email reads.

The chairman said in a response that he has a “hard time” believing the contents of the email after numerous attempts to reach Peng via known channels had failed. “The WTA and the rest of the world need independent and verifiable proof that she is safe,” Simon said.

“Peng Shuai must be allowed to speak freely, without coercion or intimidation from any source. Her allegation of sexual assault must be respected, investigated with full transparency, and without censorship.”

In comments on social media, many observers have also questioned the authenticity of the email. Some spotted a typing cursor that appears to be visible in the third line of the email shared by CGTN in a screenshot.

Did she (you) forget to hit “send”? We can all see the cursor. pic.twitter.com/GGCAXmsOTh

According to a media release by U.S.-based rights group Chinese Human Rights Defenders (CHRD), the email statement “should not be taken at face value.”

“The Chinese government has a long history of arbitrarily detaining people involved in controversial cases, controlling their ability to speak freely, and making them give forced statements,” said research and advocacy coordinator William Nee.

As the overseas arm of China’s state broadcaster CCTV, CGTN is among the numerous propaganda tools wielded by the ruling communist party in an attempt to sway foreign opinion. It has been sanctioned on numerous occasions by British TV regulator Ofcom for airing forced confessions by a British businessman, a Hong Kong bookseller, and an employee of the UK consulate in Hong Kong.

“Those who care about sports should continue to speak out until the world can see with their own eyes that Peng Shuai is free and unharmed,” Nee said.

WTA on Nov. 14 called for a “full, fair, and transparent” investigation, and demanded that Peng not be censored. ATP Chairman Andrea Gaudenzi, men’s No. 1 Novak Djokovic, and four-time Grand Slam champion Naomi Osaka also expressed concerns over her safety.

Peng is a former No. 1-ranked player in women’s doubles, and a two-times Grand Slam champion—at Wimbledon in 2013 and the French Open in 2014, both alongside Taiwan’s Hsieh Su-wei.

Her accusation is the first against a prominent Chinese government official since the #MeToo movement took hold in China in 2018. The movement was also largely tamped down by authorities later that year.

In response to a question at a daily press briefing, Chinese Foreign Ministry spokesperson Zhao Lijian said he had no knowledge of Peng’s situation.