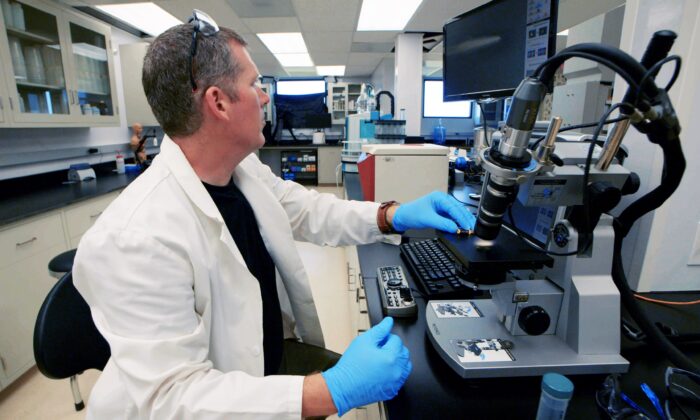 His advice: People need to get prepared now.

“The thing to really watch for is the food inflation,” Adams said.

“Grocery stores are going to respond with increased security and checkpoints. At some point, we’re probably going to see an attempt at price controls and rationing.

“And not on everything—certain types of things. It’s almost certain that they will attempt to enforce the rationing with a vaccine passport app that becomes a food rationing app,” Adams told The Epoch Times.

Adams is not alone in his predictions of hard times coming to America—and the world.

With food production buckling under the weight of runaway inflation, skyrocketing fuel costs, and fertilizer shortages, much of what’s in store is already “built-in.”

And consumers will pay for it in higher prices for basic necessities.

“Many farmers are deciding not to plant. In addition, the diesel fuel prices and diesel fuel scarcity is going into their equation of whether they should plant,” Adams said.

The upshot, he said, is that fewer farmers are planting, which means less food to go around.

As a food scientist Adams is a big proponent of clean, organically grown food free of heavy metals, which he makes available through the online sale of “Ranger Buckets.” The demand for his products has been extremely high since the COVID-19 lockdown began in 2020.

Adams said it takes on average six to eight weeks to produce 2,000 buckets, which typically sell out within 30 minutes to three hours.

Even before the Russian invasion of Ukraine, the demand for survival food in the United States has been on the increase among a number of national suppliers.

“The supply chain in the United States continues to crumble. More Americans are realizing it takes four trips to different home improvement stores for parts to make home repairs, instead of all their needs being in one store,” said Lori Hunt at Practical Preppers in South Carolina.

“That is making folks realize this extends to everything: food, books, solar equipment—and considering Ukraine is a source for critical raw materials in the solar industry, this is going to get much worse in the coming months,” she told The Epoch Times.

“Many of our customers are moving toward energy independence, and this is making a greater demand and diminishing supply situation. We are urging our customers to be prepared for a 2–4 month wait to amass all parts needed for their systems. Many installers around the United States are telling us they are experiencing the same.”

Byron Walker, Founder and CEO of Survival Frog in Denver, told the Epoch Times, “We have struggled with supply chain issues and things only appear to be getting worse.”

Allied Marketing Research (AMR) reported that the global incident and emergency market, valued at $75.5 billion in 2017, is projected to reach $423 billion by 2025.

“Factors such as rise in need for safety and security solutions, owing to increase in natural calamities and terrorist attacks, implementation of regulatory policies for public safety, and the necessity for emergency preparedness drive the growth of the global incident and emergency management market,” AMR said on its website.

“In addition, the surge in smart cities is expected to drive the adoption of intelligent evacuation systems and surveillance systems, thereby fueling the incident and emergency management market growth.”

In recent weeks YouTube survival “preppers” such as City Prepping and Alaska Prepper have been sounding the alarm that hard times are just ahead.

Matt the “Magic Prepper,” in North Dakota, said being prepared continues to go mainstream as a “financial and scarcity genre” in view of current global events.

“With food production issues, supply chain problems, a slow economic recovery from the pandemic, and the cascading effects of an overseas conflict, it seems rather clear that shortages, disruptions, and price hikes are here to stay,” Matt told The Epoch Times.

He said the situation in Ukraine has revived interest in preparedness in case of a nuclear, biological, or chemical attack.

“With the conflict creating volatile rhetoric from multiple global superpowers, we find ourselves closer to such an event than any point in recent history,” Matt said. “I operate under the assumption that there is and will likely always be more time to prepare.”

Still, the state of being prepared is “exponentially limited” by the length of time it takes to get prepared, and other factors, he said.

“Every dollar spent today is worth less in value toward preparations than a dollar you would have spent three years ago. Therefore, by waiting to begin, you’ll inherently be able to prepare less and less.

“This is most obviously apparent when you relate it to items such as ammunition. Stocking up on it now provides you with anywhere from 50 percent [to] 75 percent less ammunition for the same amount spent on it three years ago.

“Even if we find ourselves in the midst of a full-on economic collapse or hot conflict, training and learning skills will likely still be accessible,” he said.

Preparedness also requires the ability to network and communication, having supplies in sufficient quantity, a “hardened” location, and knowledge on how to survive an economic collapse.

“I have suggested to keep moving forward regardless of the events unfolding currently. If things finally fall apart to the point of relying on our preparedness efforts, we will have prepared as best as we could up to that point.

“I am making phone calls, appointments, and plans every day to try and enhance my own personal preparedness,” Matt said.

Given the economic protectionism of halting food exports from countries like Hungary, Ukraine, Russia, and Belarus, the world supply of grain is going to be severely limited, Adams said.

This, he said, will result in the “most extreme food shortages we’ve seen in our lifetime.”

“It will begin about August and continue until the end of the year. A lot of this depends on [President Joe] Biden’s economic decisions on whether he allows U.S. oil companies to finish pipelines and do more drilling. If he does not we are going to see even more shortages throughout 2023.”

Out of chaos, however, Adams foresees a reawakening of freedom and self-reliance in the way we grow and produce food.

“I think this is a red pill moment for the people of the world that they need to be more self-reliant. We need decentralization of food production. I’m a big proponent of decentralization—food grown locally.”

The bad news is that only about 5 percent of people in the United States are prepared. But “the more people prepare, the less they panic when shortages appear,” Adams said.