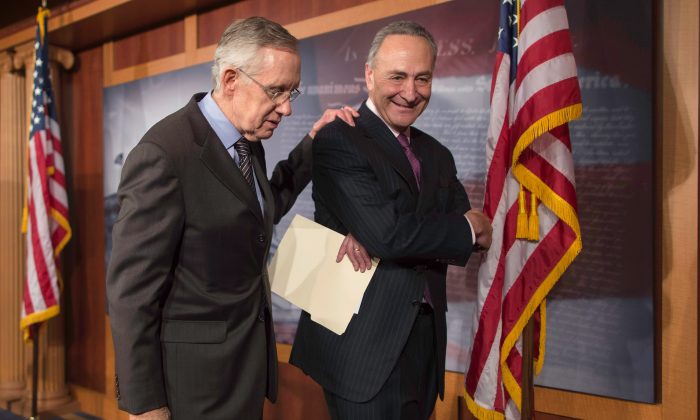 Senate Majority Leader Harry Reid and Sen. Chuck Schumer leave after talking to reporters about the use of the "nuclear option" at the U.S. Capitol on Nov. 21, 2013. (Chip Somodevilla/Getty Images)
Viewpoints

Back in November of 2013, then-Senate Majority Leader Harry Reid tweeted out the following message: “Thanks to all of you who encouraged me to consider filibuster reform. It had to be done.”

Thanks to all of you who encouraged me to consider filibuster reform. It had to be done.

That was just after Reid and top Senate Democrats used their majority to change the rules on the filibuster. Instead of needing 60 votes to confirm nominees to executive branch posts and to the judicial bench, now only 51 votes would be necessary.

This change to the Senate rules occurred at a time when the Obama administration was fully engrossed in the big undertaking of politically weaponizing most of the federal government to tilt the playing field forever in the favor of their own party.

Now that Obama had been safely reelected in 2012, Democrats had absolutely no fear whatsoever of ever losing control of the federal government. They were in the process of stacking the deck so high in their favor that losing control was unthinkable.

Obama and his people got to spend eight full years rigging the game in their own favor. I’m not talking about just siccing the IRS on Conservative Tea Party groups. Most people have no grasp of how bad it was, the corruption of our government that was occurring.

Remember the Consumer Finance Protection Board? That was created on Obama’s watch and in just a few short years levied several billion dollars in fines on the financial services industry. Guess where most of that fine money went?

It went to favored Democratic political activist groups. The agency was essentially functioning as a huge Democratic slush fund. Even under Republican Presidents like the Bushes, Democratic political partisans in Washington had spent years setting up lucrative grants and handouts from the EPA, the NEA,  and many other agencies.

When Obama and his Attorney General, Eric Holder, got into office starting in 2009, this process of weaponizing the federal agencies and siphoning federal taxpayer money to favored Democratic activist groups accelerated like a V-2 rocket headed to the moon.

And of course, Obama got 8 years of judicial appointments. Something that he took full advantage of. Two full terms of appointing judicial activists to the various federal courts has led to more than a few novel interpretations of the law.

So back in 2013, after Obama had just been safely reelected, the picture for the Democrats looked so very different at that time, didn’t it? Obama’s heir apparent was getting ready for her long-awaited coronation in 2016. Hillary would at last take her turn in the White House and then everything would continue to transition smoothly for her 8 years as President.

This is how Democrats were thinking five years ago in November of 2013. Knowing everything that was going on, how they were rigging everything in the government to the point it’d be impossible for the Democrats to ever lose power again, there was no reason to refrain from taking the vote threshold from 60 down to 51.

After all, Democrats were never, ever again going to lose control of the executive branch and its key oversight of federal agencies as well as it’s judicial appointments, right?

They held all the cards.

They had all the advantages.

They’d changed all the rules.

There was no way they could lose.

Her Majesty Hillary was serenely floating to her long-awaited coronation…….

And then a miracle happened.

The *one thing* that was never supposed to happen ever again, happened. The Democrats lost control of the executive branch.

See, Democrats can stand not having complete control of Congress. They can put up with that. They just need their activist judges and their Democrat President to keep those Republican troublemakers in the House and/or the Senate in check.

If you’d told Harry Reid, Barack Obama, Nancy Pelosi, Chuck Schumer, and Dianne Feinstein back in 2013 when it looked like they had a sure thing going, that by 2018 they’d be facing a Republican-controlled Congress and a Republican President, they would not have believed you.

They could never lose the Presidency again. They’d put far too much time and effort and planning into rigging the game in their favor. So they could never lose control of those vital judicial appointments either. Their entire strategy was centered on this.

Keep a progressive Democrat in the White House, keep stacking the courts, especially the Supreme Court, with judicial activists with a progressive agenda, and keep weaponizing those federal agencies. It was a plan that couldn’t fail!

Only the plan *did* fail. They had no answer to Trump, and so they lost control of the Executive Branch. Which means—surprise!—they lost control of judicial nominations. Not only is Trump straightening out the federal agencies, he’s making dozens of judicial appointments. President Trump has already seen more judges voted onto the bench than any other President at this juncture into a 4-year term.

And so here we are for the 2nd time in 2 years, where President Trump is making an appointment to the Supreme Court, and the Democrats are powerless to stop it. They can’t stop it because….?

Because Harry Reid nuked the Senate filibuster back in 2013. Democrats are victims of their own hubris.

Mitch McConnell warned them. He told them on that day back in November of 2013: “I say to my friends on the other side of the aisle, you will regret this, and you may regret it a lot sooner than you think.”

So keep all this in mind as you watch the Democrats smuggle protesters into the Senate chamber to throw tantrums and cause scenes because in their own self-inflicted stupidity, Democrats put themselves in this position where they couldn’t stop Neil Gorsuch or Brett Kavanaugh.

It’s only year two of the eight-year Trump era. Imagine what Democrats will be doing in the future when Trump makes his Supreme Court appointments #3, #4 and possibly even #5.