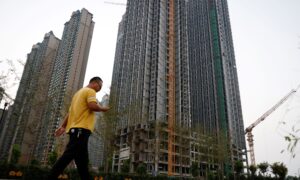 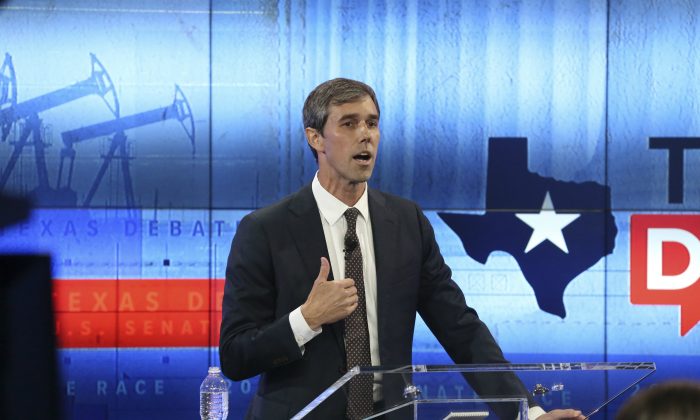 A few times over the past several months, I’ve had to stop and pinch myself to confirm that I’m not dreaming, that this is really happening here in Texas—that the Democrats ran someone such as Rep. Beto O’Rourke against incumbent Sen. Ted Cruz.

It was recently announced by O’Rourke that his donations to his campaign had exceeded $38 million over the previous three months. That makes the race for this U.S. Senate seat the most expensive in U.S. history.

“Combined, Cruz and O’Rourke will have at least $96 million going into the final weeks, with still a month of fundraising to add to that total,” the Houston Chronicle reported on Oct. 12.

Now, if O’Rourke had an actual chance to win this race, that would be a good investment of all that Democratic Party money. But he doesn’t have a chance. In fact, I expect him to lose this race to Cruz by double-digits. Currently, in most polls, O’Rourke is trailing Cruz by 7 to 9 points.

Ponder this: The Democratic Party decided to run a guy, and invest all this money in this race in Texas, when

2. He is “open” to abolishing Immigration and Customs Enforcement (ICE).

3. He thinks taxpayer-funded abortion organizations such as Planned Parenthood are awesome.

4. He can’t wait to roll back the Trump tax cuts and then raise taxes higher.

5. He wants to scrap work requirements for welfare recipients.

6. He wants to repeat the Obama policy of “stimulus spending.”

7. He would vote to impeach President Donald Trump.

That might be an effective stance on these issues in, let’s say, Washington or New York City, but Texas? Sometimes watching O’Rourke in action, I’ve had to stop and ask myself several times: Does this guy even grasp which state he’s running in?

The Democratic Party has been out of power for 2 1/2 decades for very good reasons. Not since 1994 have the Democrats won a statewide race in Texas, after enjoying almost unchecked control for nearly 100 years. The abuses and corruption of the Democratic Party in Texas reached legendary proportions, to the point where voters finally had to notice. While some Texans referred to the last Democratic governor, Ann Richards, as “Ma Richards” out of affection, a lot of us called her that as a not-so-indirect reference to the infamous 1930s outlaw and gang leader Ma Barker.

Texas was always a conservative-leaning state. Most of the Democrats in Texas were what were known as “blue dog Democrats”—a Democrat from a Southern state who has a conservative voting record.

Well, here’s what happened: Radical progressives took control of the national Democratic Party in the mid-1960s and embarked on a deliberate strategy of taking the party incrementally further and further to the left. By the time the late 1980s/early 1990s arrived, blue dog Democrats throughout Southern states found themselves increasingly shut out of party leadership and unable to stop the accelerating leftward slide.

Blue dog Democrats in the South started being replaced with Republicans all through the 1990s, during the Bill Clinton era, which was when the Texas Democratic Party suddenly found itself on the outside looking in. There were still some Blue Dogs striving to hang on by the time Barack Obama became president in 2008, but the enacting of his trillion-dollar stimulus package and Obamacare prompted voters to boot the last few blue dogs out of Congress, to be replaced by Republicans.

After the push to drive out all the conservative-leaning politicians, since there was no longer a counterbalance, the radical progressives were able to accelerate the leftward movement of the party as a whole. That started at the national level of the party in the 1960s and trickled down to the state level over the following 30 years. Since the last blue dogs were forced out from 2010 to 2012, the Democratic Party’s slide to the far left has accelerated dramatically.

This is how we ended up with a Texas Democratic Party that spent all of the 1980s and 1990s purging blue dog Democrats, to the point where the Texas voters realized there were no blue dogs left. And since there weren’t any conservative-leaning Democrats to vote for, they began switching their votes to the GOP.

And let me tell you, it’s been nothing short of amazing watching how the obstinate and stubborn radicals who now run the Texas Democratic Party responded to what the voters did.

Instead of “coming home,” moving to the center, and becoming more conservative-friendly in their policies—and welcoming the old blue dogs back or creating new blue dogs—the national Democratic Party and the state-level party leaders opted to embark on an incredibly ambitious program of “flipping Texas blue.”

In other words, they became more radicalized in their left-leaning policies and focused on trying to change the voters from conservatives to progressives. The amazing thing is, they think it’s working.

They’ve spent over a decade convincing themselves Texas isn’t really a deep red state—it’s actually a purple state that’s ready to flip back to a solid blue state if only they can just find the right kind of candidate to run in a state-wide race.

Every couple of years, they fool themselves into believing this new candidate is going to be the vital salesperson they’ve been waiting for to pitch their progressive policies to Texas voters, and, at last, the voters are going to respond and put the Democrats back in power.

I almost feel sorry for them.