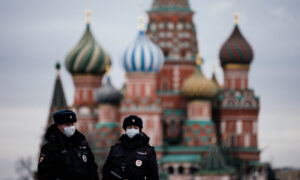 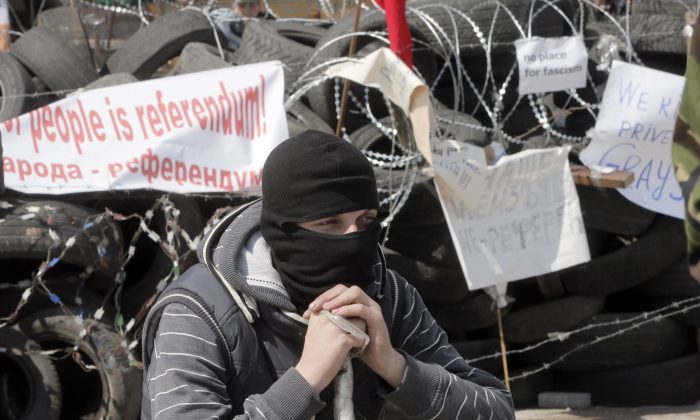 A masked pro-Russian activist guards a barricade at the regional administration building that they had seized earlier in Donetsk, Ukraine, Tuesday , April 15, 2014. Several government buildings have fallen to mobs of Moscow loyalists in recent days as unrest spreads across the east of the country. (AP Photo/Efrem Lukatsky)
Europe

Reports are saying that Jews have been ordered to register in Donetsk, located in eastern Ukraine, or they’ll face deportation. However, there are conflicting reports over the issue.

The Israel-based website Ynetnews first broke the story and posted a flier written in Russian, which said it needed to be distributed outside of a synagogue in Donetsk, which has a pro-Russian government.

The leaflet says that all Jews over the age of 16 have to register amid the Passover festivities. The flier demanded that Jews need to supply a list of all the property they own or they’ll have their citizenship revoked, Ynetnews said. They also have to pay a fee of $50.

However, another report from The New Republic is saying that the Ynet report and similar reports aren’t entirely accurate.

The New Republic’s Julia Ioffe writes: “The Donetsk Jewish community dismissed this as ‘a provocation,’ which it clearly is. ‘It’s an obvious provocation designed to get this exact response, going all the way up to Kerry,’ says Fyodr Lukyanov, editor of Russia in Global Affairs. ‘I have no doubt that there is a sizeable community of anti-Semites on both sides of the barricades, but for one of them to do something this stupid—this is done to compromise the pro-Russian groups in the east.'”

The website said that the Jews in Donetsk may have been asked to register but it appears that it’s not being enforced.

“Exactly who distributed the leaflets, and why, is still unclear. The material purportedly bore the signature of Denis Pushilin, the self-proclaimed leader of the pro-Russian separatist group, but he has maintained that his group had nothing to do with the leaflets and that they were put out by someone else to discredit the separatists as being anti-Semitic,” the website says.

US decries anti-Semitic leaflets in Ukraine

WASHINGTON (AP) — The United States on Thursday condemned as “grotesque” the distribution of leaflets demanding that Jews in eastern Ukraine register with a self-proclaimed local authority or face consequences. U.S. officials also denounced other instances of religious intolerance that are inflaming tensions the crisis in Ukraine and said no such behavior could be tolerated.

Speaking in Geneva after top diplomats from the U.S., European Union, Russia and Ukraine reached agreement on steps to de-escalate the situation, Secretary of State John Kerry denounced the leaflets.

“In the year 2014, after all of the miles traveled and all of the journey of history, this is not just intolerable; it’s grotesque,” Kerry told reporters. “It is beyond unacceptable. And any of the people who engage in these kinds of activities, from whatever party or whatever ideology or whatever place they crawl out of, there is no place for that. “

In Washington, U.S. officials said the anti-Semitic leaflets, which recall the days of czarist pogroms and Nazi-era persecution of Jews, have appeared recently in the eastern Ukrainian city of Donetsk. The State Department said it was looking into who is responsible but said it took the threat seriously no matter who was behind the leaflets.

The leaflets seen by U.S. officials purport to come from the Donetsk People’s Republic, a self-styled, unrecognized breakaway authority that seeks to join Russia. The Donetsk Republic press office denied any involvement in the matter and says the leaflets are fake.