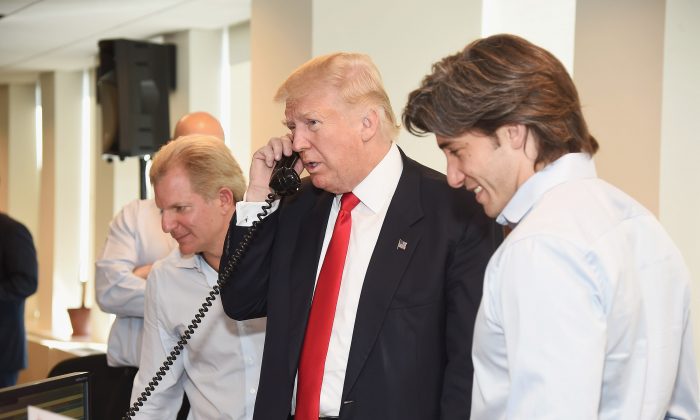 “I hope she gets well soon,” Trump said on Fox and Friends.

“I just hope she gets well and gets back on the trail and we’ll be seeing her at the debate,” he said.

The announcement that Clinton has pneumonia, an infection in one or both lungs, came after reporters and the public were left in the dark for about two hours after Clinton left a 9/11 memorial event early in New York City.

Her departure was not witnessed by the reporters who travel with her campaign, but several videos taken by the public showed the democratic candidate nearly collapsing as she was about to enter a car.

Clinton’s spokesman Nick Merrill eventually told reporters that Clinton had gone to her daughter’s nearby apartment. Clinton exited the apartment on her own and said “I’m feeling great. It’s a beautiful day in New York.”

Last week in Cleveland at a Labor Day rally, Clinton had a coughing fit, making it difficult for her to speak for about two minutes. She drank water and took a lozenge at the podium before going on to finish her remarks.

On Monday, Trump mentioned the coughing incident and suggested it might have been due to the pneumonia.

“I see what I see. The coughing fit was a week ago, so I assume that was pneumonia also,” he says. “I mean, I would think it would have been. So something’s going on.”

The Republican previously attacked Clinton over her health, saying last month that she “lacks the mental and physical stamina” to be president.

As for his own health, Trump said in the interview that he’d had a recent physical examination and that he’ll be releasing the results soon.

Trump is due to appear Thursday on “The Dr. Oz Show,” where he’s expected to talk about his “own personal health regimen,” Fox News reported. Dr. Oz also will ask Trump “why the health of the candidates has become such a serious issue in this campaign.”