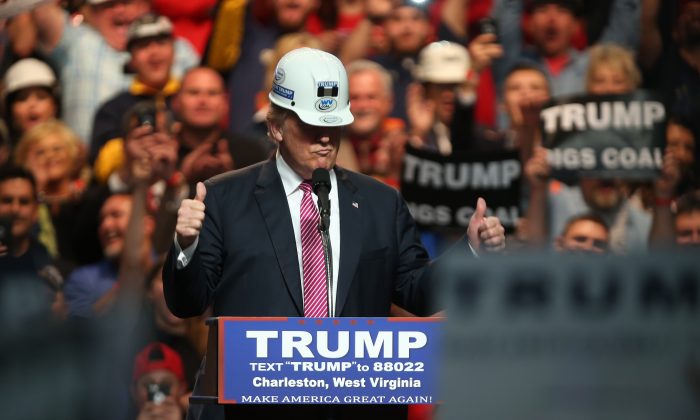 Republican Presidential candidate Donald Trump models a hard hat in support of the miners during his rally at the Charleston Civic Center on May 5, 2016 in Charleston, West Virginia. (Photo by Mark Lyons/Getty Images)
Politics

'Save your vote for the general election'
By Steven Klett

Now that Donald Trump is considered the presumptive nominee of the Republican party he told voters at a rally in West Virginia not to bother voting in the primary season. Instead, he told the crowd, “save your vote for the general election in November.”

The comments came at a rally in Charleston, West Virginia as Trump took a victory lap in front of 13,000 screaming supporters, saying also: “I wish the primaries would keep going but I am the only one left.”

The Republican candidate was in good spirits as he briefly adorned himself with a coal miner’s hard hat and reiterated his support for the industry in a state where coal mining is still a major industry.

“I’ll tell you a little secret. I’ve always been fascinated by the mines,” speaking in front of uniformed coalminers holding signs that read “Trump digs coal.”

The rally featured a shift away from criticism towards fellow Republicans, and increased focus on the Clintons—referencing Bill Clinton’s Monica Lewinsky scandal, and calling the Clinton Foundation a “scam.”

Speaker Ryan’s actual statement when asked if he supported Trump was: “I’m just not ready to do that at this point. I’m not there right now.”

Trump responded to Ryan saying in a statement:

“I am not ready to support Speaker Ryan’s agenda.”

“Perhaps in the future we can work together and come to an agreement about what is best for the American people. They have been treated so badly for so long that it is about time for politicians to put them first!”

The presumptive nominee also pushed back against Ryan, saying he didn’t inherit the Republican party, but “won it with millions of voters”:

Paul Ryan said that I inherited something very special, the Republican Party. Wrong, I didn’t inherit it, I won it with millions of voters!

Elsewhere in the speech, Trump, mixed entertainment and politics by speaking at length about hairspray complaining that it’s not good anymore:

“You’re not allowed to use hairspray any more because it affects the ozone. Hairspray used to be real good,” Trump said.

“In the old days, you put the hairspray on and it’s good. Today you put it on, it’s good for 12 minutes.”

He also came out to John Denver song “Take Me Home Country Road,” West Virgina’s state song, praising Denver as a “great friend of mine.”