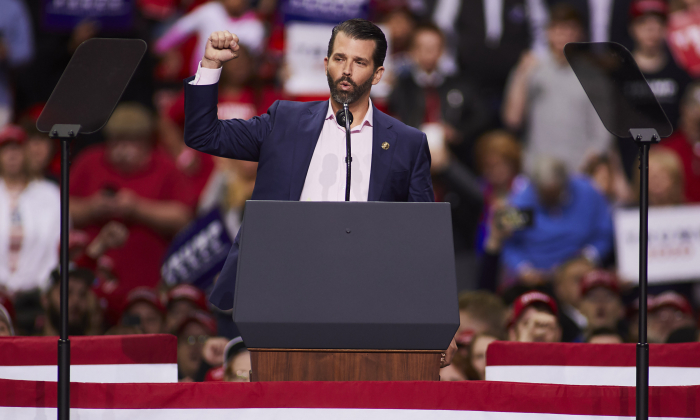 Donald Trump Jr. Calls for Early Voting in Georgia Senate Races: ‘Do Not Squander This Opportunity’

Donald Trump Jr.. showed up on Saturday afternoon at a rally in Georgia’s Catoosa County, telling people to vote for the reelection of Republican Sens. Kelly Loeffler and David Purdue in the January runoffs.

Georgia’s two Senate seats were sent into runoffs after none of this year’s candidates reached the 50 percent of the vote needed to win. The Republican incumbents, Loeffler and Perdue, will face off again with their Democrat challengers, Rev. Raphael Warnock and Jon Ossoff, respectively, on Jan. 5.

Speaking to a crowd at the Colonnade Center, Trump Jr. urged people to not only vote, but also vote early and call friends to vote, saying the Republican party has “a lot at stake.”

“Do not squander this opportunity,” said President Donald Trump’s eldest son. “Because I promise you, you will regret it. You will wake up one day in January and say, ‘Crap. Should’ve done a little bit more.’ Whatever you would do to reverse that feeling then, do it now.”

When the new Congress is sworn in on Jan. 3, the Republicans will hold a 50–48 seat advantage in the Senate. Democrats will then need to win both of Georgia’s runoffs to deny a Republican majority, if Democratic presidential nominee Joe Biden wins the White House.

“Even with the president in place, what can we do without the Senate?” Trump Jr. asked, stressing the importance of Loeffler and Perdue holding their seats in order to stop the Democrats from carrying out their “socialist agenda.”

“There’s way too much at stake, guys, for ourselves, for our families, for our freedoms—you know, all those things the left doesn’t really believe in. I still do. That’s why I’m doing this,” Trump Jr. said during the third of his three campaign stops scheduled in Georgia for the weekend.

Early voting is underway in the Peach State. According to the Georgia secretary of state’s office, a record-breaking 168,000 Georgians went to the polls on Dec. 14, the first day to vote early in-person in the Senate runoffs. Another 314,000 people voted via absentee ballot that day.

As of Dec. 18, over 1.1 million Georgians had voted in the critical runoffs, according to Georgia Votes, a website that tracks and analyzes early voting data in the state.

Trump announced Saturday night on Twitter that he will be “having a big rally” for Loeffler and Perdue, whom he described as “two great people,” the day before the runoff elections on Jan. 5. That will be the second time he campaigns for Perdue and Loeffler at a rally since the presidential election.