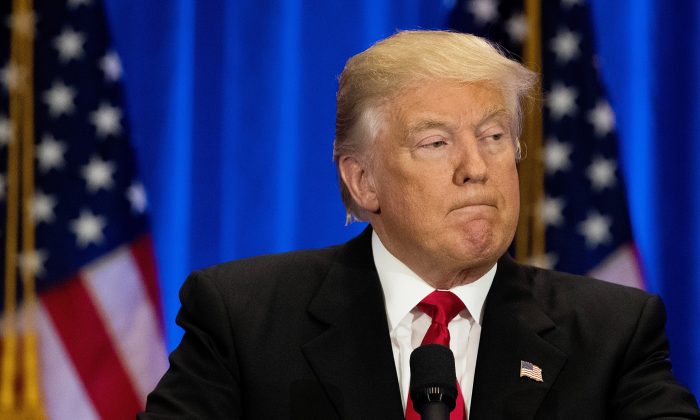 Presumptive Republican nominee Donald Trump gave a statement calling the fatal shooting of police officers on July 7 at a protest rally in Dallas, Texas “an attack on our country.”

“Last night’s horrific execution-style shootings of 12 Dallas law enforcement officers—five of whom were killed and seven wounded—is an attack on our country. It is a coordinated, premeditated assault on the men and women who keep us safe,” Trump’s statement read.

Gunfire broke out while hundreds of people were gathered to protest fatal police shootings earlier this week in Baton Rouge, Louisiana, and suburban St. Paul, Minnesota.

The Republican focused on restoring law and order and offered his prayers and condolences in the statement and in a tweet that was sent out early on Friday morning.

“Prayers and condolences to all of the families who are so thoroughly devastated by the horrors we are all watching take place in our country,” read the tweet.

Trump also addressed the racial divide in the country, saying that tensions have gotten worse.

“Our nation has become too divided. Too many Americans feel like they’ve lost hope. Crime is harming too many citizens. Racial tensions have gotten worse, not better. This isn’t the American Dream we all want for our children.”

On Friday, Trump’s campaign announced that they were going to cancel a previously scheduled rally in Miami, Florida “due to the tragic events in Dallas last night.”

Presumptive Democratic nominee Hillary Clinton also canceled an event Friday in Scranton, Pennsylvania, where she was expected to talk about the recent deaths in Louisiana and Minnesota with Vice President Joe Biden.

Clinton sent out a tweet mourning the loss of the Dallas police officers.

“I mourn for the officers shot while doing their sacred duty to protect peaceful protesters, for their families & all who serve with them,” she wrote in a tweet, ending it with a personal signature “-H.”

I mourn for the officers shot while doing their sacred duty to protect peaceful protesters, for their families & all who serve with them. -H

The statements and condolences came after President Barack Obama made a statement in Poland saying that he was horrified by the attacks, and said that there was no justification for the violence.

“We still don’t know all the facts. What we do know is that there has been a vicious, calculated and despicable attack on law enforcement,” Obama said in a brief statement to reporters.