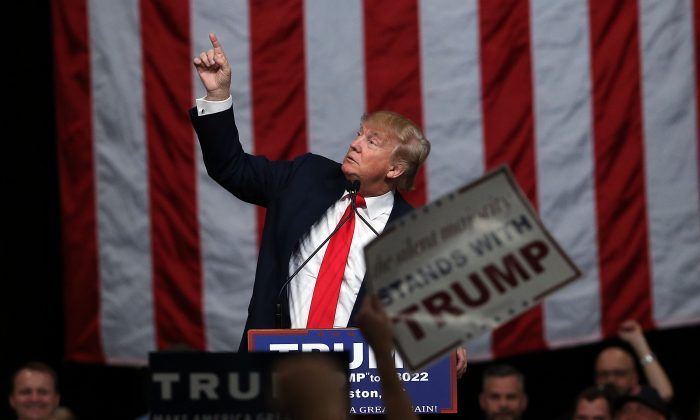 Donald Trump Gets Specific With Plan to Build Wall

Donald Trump, in a two page memo to the Washington Post on April 4, said that he would get Mexico to pay for his proposed wall at the southern border by threatening to cut off $24 billion in remittances transferred from immigrants in the United States to families back in Mexico.

Trump said that he would redact this threat if that Mexican government sent a “one-time payment of $5-10 billion” to ensure that the $24 billion flow of remittance continued.

It’s an easy decision for Mexico.

“It’s an easy decision for Mexico,” the memo read.

The Trump campaign’s memo uses an interpretation of the Patriot Act’s “know your customer” provision to compel companies like Western Union to verify a client’s identity and legal status before authorizing a wire transfer.

These are the first specific plans Trump has laid out for how Mexico will pay for the wall since he proposed building it last August. The wall’s height has been in flux, with a possible height as high as 55 ft.

“We have the moral high ground here, and all the leverage,” the memo said. “It is time we use it in order to ‘Make America Great Again.'”

They don’t expect half-baked notions coming out of the White House. We can’t afford that.
— Barack Obama

President Barack Obama was critical of the proposal saying, “Good luck with that”:

“People expect the president of the United States and the elected officials in this country to treat these problems seriously, to put forward policies that have been examined, analyzed are effective, where unintended consequences are taken into account,” Obama said. “They don’t expect half-baked notions coming out of the White House. We can’t afford that.”

Clinton and Sanders Agree to an April 14 Brooklyn Debate

Donald Trump’s proposal comes only hours before Wisconsin voters go to vote for the primary on April 5th. Trump is the frontrunner of the Republican race, but has trailed Ted Cruz in a majority of the latest polls in Wisconsin.