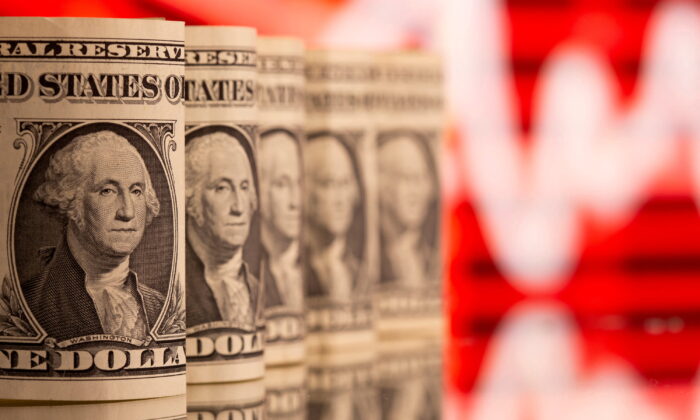 Dollar Edges Down Ahead of Key US Inflation Data

HONG KONG—The dollar edged lower on Wednesday, ahead of U.S. inflation data which markets will scrutinize for guidance on how steeply the U.S. Federal Reserve will raise interest rates.

The figures were due at 1230 GMT. Economists expect year-on-year headline inflation to be running at a scorching 8.7 percent, a small retreat from June’s 9.1 percent. Core inflation is expected at 0.5 percent month-on-month.

But the day’s main event had yet to come. A strong U.S. inflation print would damage the case that the Fed will pivot away from its focus on curtailing inflation with interest rate hikes and instead worry more about a recession, and so potentially raise rates more slowly.

Speculation that the Fed will make such a pivot weighed on the dollar earlier this month, though it has since walked back some of those losses.

“All eyes are on U.S. CPI,” said Carol Kong, a currency strategist at Commonwealth Bank of Australia. The impact of the data in currency markets, she said, would likely be seen most in dollar/yen, particularly sensitive to moves in U.S. treasuries.

The greenback was unchanged versus the Japanese yen on Wednesday ahead of the CPI print with one dollar worth 135 yen.

Traders expect reaction to turn on the core inflation figure.

“The market will initially get more excited by a downside core CPI surprise than an upside surprise,” said Deutsche Bank strategist Alan Ruskin. A downward surprise would feed into hopes that falling commodity prices mean inflation can quickly recede.

“It will also play to the market’s recent proclivity to buy risk dips, and will be a broad-based negative for the U.S. dollar,” he said.

A quick reading on policymakers’ reaction may come from Fed officials Charles Evans and Neel Kashkari, who were due to make speeches at 1500 GMT and 1800 GMT, though they will have another set of price data in August before September’s policy meeting.

The Australian dollar was calm, last hovering at $0.6971, just above its 50-day moving average.

Bitcoin, rattled by a drumbeat of cryptocurrency fund wipeouts and thefts over recent months, was at $23,000 on Wednesday.