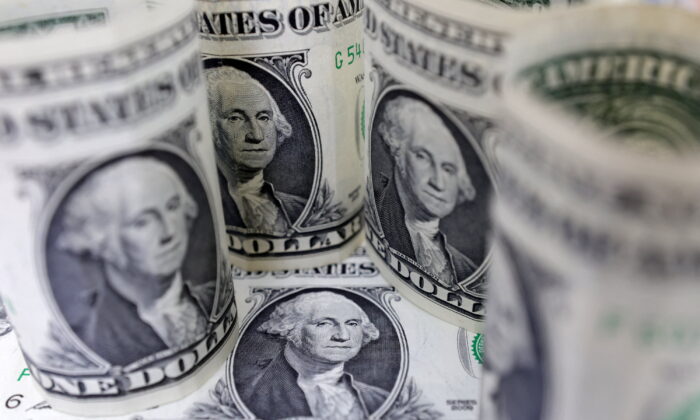 LONDON—The U.S. dollar edged lower on Wednesday but held on to most of the previous day’s gains, after leaping on Federal Reserve officials’ hints at aggressive rate hikes and drawing support amid a U.S.–China flare-up over Taiwan.

The dollar index, which tracks the greenback against six major peers, has softened from a two-decade high in mid-July as investors reined in expectations of Fed rate hikes.

But a trio of Fed officials signaled on Tuesday the central bank remains “completely united” on increasing rates to a level that will put a dent in the highest U.S. inflation since the 1980s, lifting the dollar index 0.8 percent that day.

The index pulled back slightly on Wednesday, down a quarter of a percent at 106.170.

Frictions after the highest-level U.S. visit to Taiwan in 25 years are likely to help support the safe-haven U.S. dollar, for now, currency analysts said.

China condemned House of Representatives Speaker Nancy Pelosi’s visit and began six days of military drills surrounding Taiwan, as Pelosi hailed the self-ruled island as “one of the freest societies in the world.”

“It was clear that Fed officials had thought market participants had gone too far in paring back rate hike expectations,” currency analysts at MUFG said in a note. “The hawkish Fed comments had an immediate impact.”

U.S. monthly jobs data due on Friday will help set the tone for the greenback, analysts said.

The Japanese yen—which had lost more than 1 percent versus the dollar on Tuesday—edged 0.1 percent lower on the day at 133.355 yen per dollar.

The euro gained 0.2 percent to $1.01855, despite separate data showing monthly drops in both business activity and retail sales in the eurozone.

Sterling also gained ground on the dollar, up 0.2 percent at $1.21770, ahead of a Bank of England policy meeting on Thursday at which it is expected to raise rates for the sixth straight time.